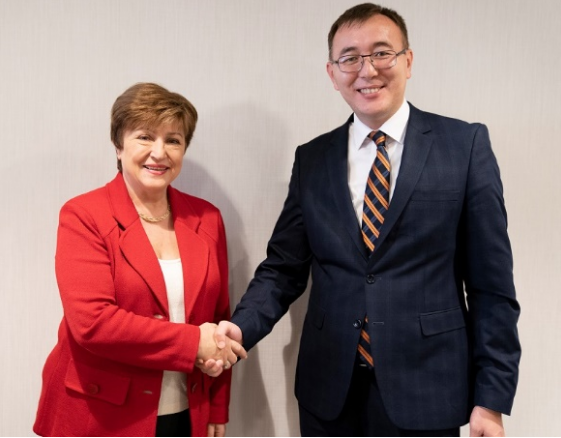 A meeting of the delegation of Kyrgyzstan with the new Managing Director of the International Monetary Fund Kristalina Georgieva took place in Washington (USA). The National Bank of Kyrgyzstan reported.

Participants of the meeting touched upon issues of further interaction of the IMF with Kyrgyzstan. In addition, an annual meeting of the Governors of the International Monetary Fund and the World Bank was held in the U.S. capital.

«The Kyrgyz delegation held several important negotiations with the leadership of the IMF and the World Bank on the activities of the central bank and the global economic situation as a whole,» the National Bank said.

In 2015-2018, Kyrgyzstan’s cooperation with the IMF was a part of an agreement on a three-year economic program — an Extended Credit Facility (ECF). Its goal was to achieve budget and debt situation stability, ensure stability in the financial sector and carry out structural reforms to increase the growth potential of the economy.

Within the framework of the program, Kyrgyzstan had received loans to support the state budget of the country for three years. It came to an end on April 8, 2018. A new program has not yet been announced.