A photo depicting officials of Naryn region’s administration, including the Plenipotentiary Representative of the Government of Kyrgyzstan Amanbai Kaiypov, against the background of shipping containers was posted on social networking websites. Note to the picture says that this is a school in Kenesh village, where children will be taught temporarily. 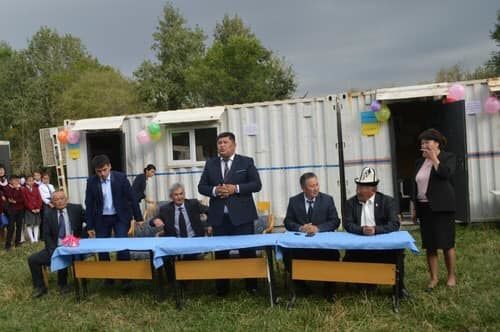 Administration of Naryn region confirmed to 24.kg news agency that the photo was genuine and there was such a «mobile» school.

According to the office of the plenipotentiary representative in the region, the educational institution in Kenesh village is in disrepair. «The Ministry of Emergency Situations banned use of this dilapidated building. Therefore, lessons will temporarily take place in specially equipped containers. There are six of them, all of them are insulated. 160 children will study in them in two shifts,» the administration explained.

Officials promised that other buildings or houses that can be used as premises for classes would be found after the onset of cold weather.

The total number of schoolchildren throughout the country is 1,300 million, schools — 2,265.

link: https://24.kg/english/128252/
views: 735
Print
Related
Online school enrollment system resumes work in Kyrgyzstan
Over 50 schools and kindergartens to be repaired in Bishkek
School fees: Education Ministry develops tool for tracking money online
105 million soms to be spent on overhaul of schools, kindergartens in Bishkek
Government of Kyrgyzstan promises to repair dilapidated schools in 2020
Prime Minister promises no dilapidated schools in Kyrgyzstan in 2020
Non-governmental foundations at schools may be closed
More than a half of Bishkek schools built 70 years ago
At least 60 percent of schools in Bishkek built over 50 years ago
16 schools in critical condition in Kyrgyzstan
Стоимость акций Центерры на бирже в Торонто (TSX)
на 04.06.2020
USD 9,15

28 more people get infected with coronavirus in Kyrgyzstan, 1,845 in total