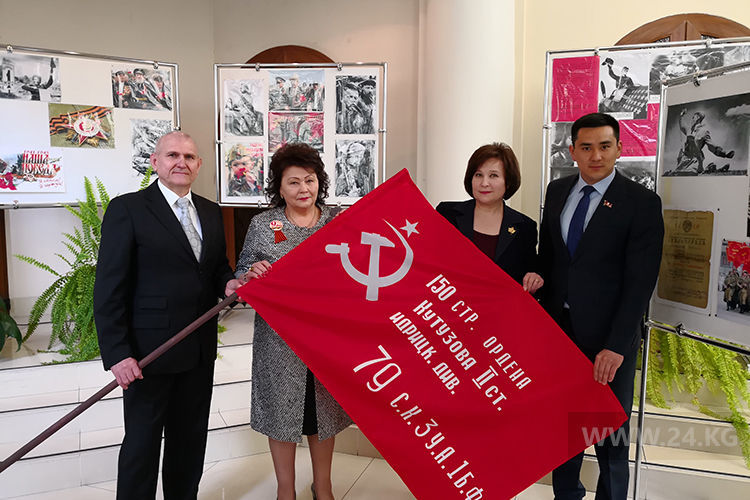 Embassy of Russia in Kyrgyzstan handed over copies of Victory Banners to the deputies of the Bishkek City Council and coordinators of Immortal Regiment march.

«We hand over a copy of the Victory Banner, which was installed on the Reichstag, taking into account how much attention is paid in Kyrgyzstan to the celebration of Victory Day and events related to the war. About 363,000 people from Kyrgyzstan went off to war, more than 90,000 of them died. Much attention is paid to the memory of those events in Kyrgyzstan. In particular, we expect the Immortal Regiment to be held not only in Bishkek, but also in 32 cities and towns of Kyrgyzstan,» the Ambassador Extraordinary and Plenipotentiary of the Russian Federation to the Kyrgyz Republic Nikolay Udovichenko said.

The Chairman of the Bishkek City Council, Zhanybek Abirov, told reporters that the proposal to hand over a copy of the Victory Banner was voiced by the deputy Valentina Lisnichenko. She was supported by the Embassy of Russia in Kyrgyzstan.

«This is a big event for Kyrgyzstan. We will hand over copies of the Victory Banner to the City Councils of all cities in order to participate in Immortal Regiment march with them. This event is very important for everyone,» said Zhanybek Abirov.

He stressed that the preparation for Immortal Regiment was already being completed. Final rehearsal of the march will take place on May 6. Authorities of the capital invite everyone to join the march.

«This is a tribute to the memory of the heroes, those who took part in the battles, contributed to the Victory. We will also hold a small reception for those veterans who survived. We will honor them,» Nikolay Udovichenko told.