Temir Sariev believes that charges against Tekebayev have political connotation

The first official presidential candidate in elections of 2017 believes that the case against Omurbek Tekebayev is politically motivated. 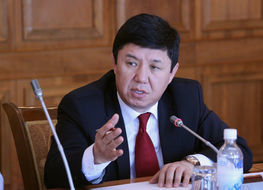 Temir Sariev commented on the recent events around the leader of Ata Meken party.

According to Temir Sariev, Tekebayev is accused of corruption. He described the charges as very serious.

«No one should obstruct the implementation of needed actions. Tekebayev himself is interested in it first of all," Temir Sariev said.

«However, it should be noted that the accusations should be confirmed. The Constitution guarantees the presumption of innocence and the only objective investigation in court can give a definitive answer to question whether a person is guilty or was slandered," the candidate for president said.

«Omurbek Tekebayev is the politician with years of experience. In the last few months, he was in a tough confrontation with the President Almazbek Atambayev. Therefore, the charges and the detention of Tekebayev, whether we like it or not, are politically motivated.

I appeal to the President:

Almazbek Sharshenovich, you are the president of the country. And above all you are interested in the preservation of peace and stability in society. I hope and urge you to ensure stability in the country.

According to Temir Sariev, the only possible way out in the situation is full respect for the rule of law. Actions of law enforcement agencies and the court decision will be taken by the people of Kyrgyzstan only if the people are confident in a strict compliance with the laws of the country.