A new mufti has been elected in Kyrgyzstan. The Spiritual Directorate of the Muslims of Kyrgyzstan (SDMK) informed 24.kg news agency.

Zamir Rakiev became the head of the Muslim clergy.

In addition to him, eight more people applied for this position. 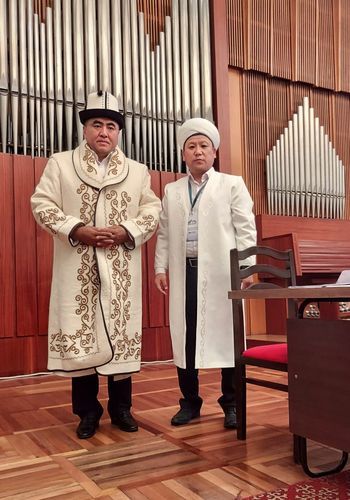 Zamir Rakiev is 43 years old, he is from Naryn region. He completed courses in Egypt and graduated from the Bishkek Humanitarian University with a degree in Oriental Studies. In 2020, he became the kazy of Bishkek.

It was the third attempt by the Ulema Council to elect a new head of the SDMK. The first kurultai of the Muslims of Kyrgyzstan was scheduled for April 5. Registration of candidates for the post of mufti of the Kyrgyz Republic ended on March 17. But the elections of mufti were postponed to May 29 due to pressure on the certification commission.

link: https://24.kg/english/199005/
views: 1240
Print
Related
Mufti Zamir Rakiev gets vaccinated against COVID-19
Beating of child in Issyk-Kul: SDMK calls for religious tolerance
Ulema Council of SDMK issues special fatwa on COVID-19 vaccination
Ex-mufti Maksat azhy Toktomushev in Moscow despite recognizance not to leave
Rally held at Spiritual Directorate of Muslims of Kyrgyzstan in Bishkek
Election of mufti of Kyrgyzstan scheduled for May 21
COVID-19: Temporary ban on Friday prayers in mosques imposed in Bishkek
SDMK: Vaccination does not violate Muslim fasting rules
Ulema Council postpones election of mufti to May 29
Eight people run for post of mufti. Election to take place on April 5
Popular