Businessman from Turkey urges not to invest in Kyrgyzstan

Turkish café Taksim — Bir Tuugandar closed down in Bishkek. Owner of the cafe, Ali Iflazoglu, posted about it in social networks.

According to him, he opened the food outlet 14 years ago.

«Perhaps, this is the last video I shoot in Kyrgyzstan. I appeal to the President of Turkey Recep Tayyip Erdogan. At a meeting in 2007, you said us to invest in the lands of our ancestors. I came to Kyrgyzstan and invested, opened a family café, employed the locals. I pay taxes. I invested $ 470,000. I paid $ 70,000 for the permit. What do I get in return? Fifty people were left without work. The cafe is now being demolished; they want to build a shopping center in its place. Laws do not work in Kyrgyzstan,» Ali Iflazoglu said in his video message.

He also complained that he did not find support from anyone.

«Our Turkish Embassy does not help us in any way. When the Foreign Minister of Turkey Mevlut Cavusoglu came to Kyrgyzstan, I wanted to meet with him and tell about my situation, but I was not allowed to do it. No one protects the business here. Neither the police, nor the courts, nor the ombudsman, nor the president of Kyrgyzstan, nor the Turkish embassy, ​» Ali Iflazoglu said.

He admitted that he also faced threats and attacks.

«Men of athletic build and bandits were sent to me. My family was threatened nine years ago. They shot me once in the leg. And now, finally, they have achieved their goal, the cafe is closed down,» the businessman said.

He urged Turkish entrepreneurs not to invest in Kyrgyzstan.

«I am addressing Turkish citizens who are planning to invest in Kyrgyzstan. Don’t throw money down the drain. I had worked here for 14 years, but in the end they «ate away» my money and made me guilty. The trial was held today, but the decision remained unchanged. Is it Africa here? Where are the laws? They cut off the electricity forty days ago, and now the water supply. All this time, the cafe was working using a generator. If investors come here, they will be robbed. The words about protection of business said by the authorities are just empty phrases,» Ali Iflazoglu said. 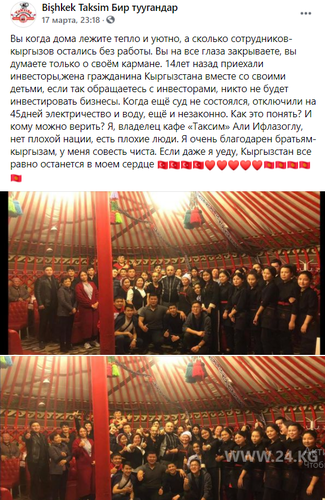