According to him, employees of law enforcement agencies and special services performed the Hajj at the expense of pilgrims, illegally received travel allowances, extorted money, and interfered in the internal affairs of the Spiritual Directorate of the Muslims of Kyrgyzstan (SDMK).

«When I was appointed the head of the State Commission on Religious Affairs, people from the muftiyat came to me with a complaint about an employee of the 10th Department of the Ministry of Internal Affairs, who was putting pressure on workers and forcing them to organize a free trip for him to Mecca. He also insisted that his friend should go with him. This officer often came to the muftiyat, took authorized persons to dinner and exerted moral pressure. As a result, he was included in the list of persons who were supposed to perform the Hajj, and he was allocated $ 3,000 to pay for the Hajj and $ 500 as travel allowances. The employees of the 4th service of the State Committee for National Security performed the pilgrimage in the same way,» Akin Toktaliev told. 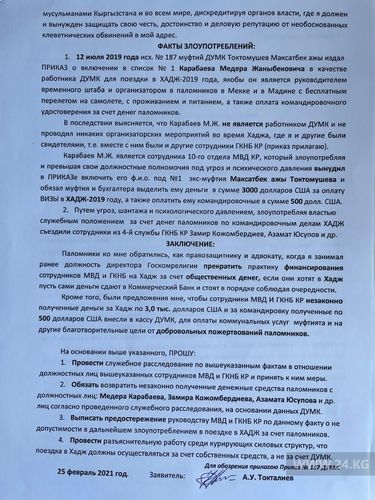 As the ex-official notes, the pilgrims asked to stop the practice of financing the Hajj performed by employees of the Ministry of Internal Affairs and the State Committee for National Security at the expense of public money.

«As a director, I told the members of the SDMK that it was time to stop this practice, otherwise they would lose their posts. After that, the law enforcement officers began to persecute me. They allegedly collected damaging information against me, wrote that I had relations with extremist organizations. This discrediting information was sent to Sadyr Japarov, and he did not even listen to me that led to my resignation. But all the same, I will bring these people out into the open, because I believe that this is nothing but interference in the affairs of the clergy,» Akin Toktaliev added.

He noted that he sent a statement about the facts of pressure, extortion, abuse of office and interference in the affairs of the SDMK to the State Committee for National Security, the Prosecutor General’s Office, the Parliament, the Government and the President.

«I ask you to conduct an official investigation into the aforementioned facts in relation to the employees of the Ministry of Internal Affairs and the State Committee for National Security and take measures against them. To oblige them to return the illegally received money of the pilgrims,» Akin Toktaliev said.

Akin Toktaliev was the lawyer of Sadyr Japarov during the criminal prosecution against him.

On November 13, 2020, he was appointed the head of the State Commission on Religious Affairs. He worked in this position for less than three months. Sadyr Japarov dismissed him from office on February 10, 2021.