Related news
Switzerland allocates $ 195,500 for social institutions in Kyrgyzstan
WFP will use the funds for cash assistance to 80,000 people who will work in community assets creation or skills training programmes designed to increase their employment opportunities and build their resilience against future shocks.

Representatives of the organization visited Zhaiyl district, where implementation of the project began.

First of all, the organization paid attention to the state of the park zone in Kara-Balta city. It was decided to improve the infrastructure there. The project included planting of 200 coniferous trees, 300 deciduous trees, 1,000 bushes and preparing of 5,000 saplings in a greenhouse for spring planting. 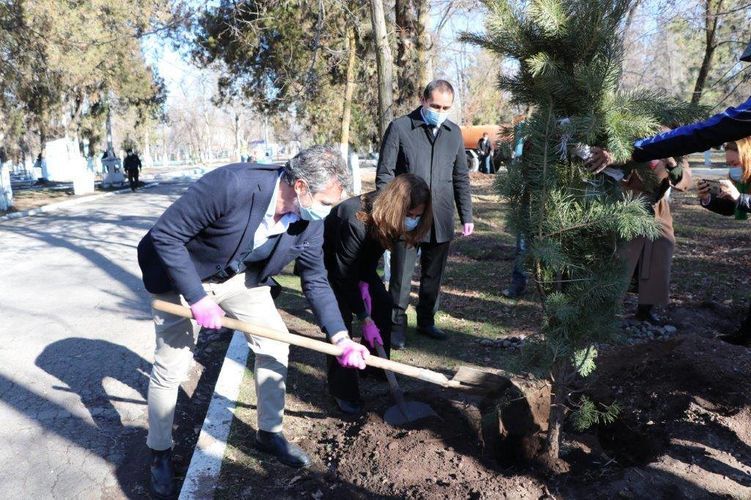 At least 28 feeders for squirrels, 40 birdhouses and two sets of benches will be made, which will later be installed in the city park.

Participants are involved in public works with preparation of land plots for landscaping and cleaning the area from garbage. The work is carried out in several stages, taking into account weather conditions. Initially, the participants helped prepare the ground for landscaping and clean up the park. The first planting of 200 coniferous and 300 deciduous trees is planned for this month.

Within the framework of the project, 12 women were also trained in care for patients, people with disabilities and the elderly at the Pirogov Medical College.

At least 181 families in Kara-Balta receive social benefits «ui-bulogo komok». In order to increase the potential of people living below the poverty line or officially unemployed, it was proposed to organize vocational training for personal assistants. Twelve women (training participants) received $ 100 each.

The goal is to help parents of children with disabilities and the elderly to improve their skills and ability to provide health care at home and cope with stressful situations.

WFP also provided three-month emergency food assistance in the form of fortified wheat flour and vegetable oil to the Zhayil Women’s Psychoneurological Social Hospital to provide its residents with adequate food during the pandemic outbreak.

Masks, gloves, disinfectants were also handed over to the institution.

Earlier, the Swiss Government allocated $ 195,500 to provide assistance to 22 social inpatient institutions and boarding schools in the Kyrgyz Republic.