Ex-chairman of the State Committee for National Security of Kyrgyzstan (SCNS), Abdil Segizbaev, was summoned for interrogation. His relatives told 24.kg news agency.

This morning, the staff of the state committee handed the summons to the former head of the special services. He has been under interrogation since 10.00 am.

«Abdil Segizbaev has not left the building yet, although more than seven hours have passed. He was summoned for questioning as a witness,» his relatives said. 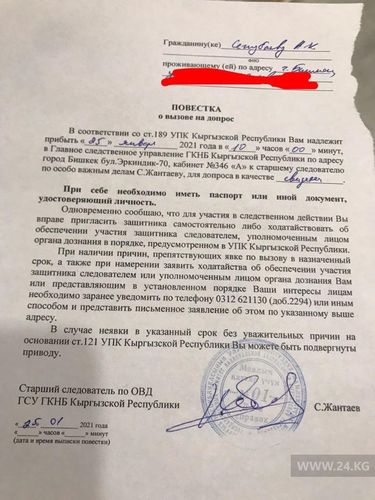 Abdil Segizbaev is involved in two criminal cases — on corruption during transformation of land plots in Koi-Tash village and on the so-called Belizegate.

The second case was initiated at the request of the former head of Ata Meken faction, Almambet Shykmamatov, filed by him back in 2019. Then the main supervisory body refused the applicant, noting that there was no corpus delicti in Segizbaev’s actions. The Prosecutor General’s Office canceled its decision now and issued a new one — to satisfy the request of Almambet Shykmamatov. He demands to bring Abdil Segizbaev to criminal responsibility for distributing false documents on Belizegate.