Decree on naming a street after the ex-head of the Ministry of Internal Affairs of Kyrgyzstan Moldomusa Kongantiev was canceled. This decision was made by Kok-Zhar rural council.

Proposal of residents of the housing estate to rename the street into Muras was approved. 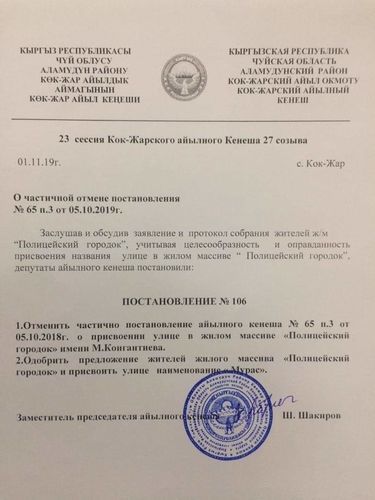 One of the streets in «Police Town» residential complex was named after Moldomusa Kongantiev. It became a reason for heated discussions on social media, users called for cancellation of the decision.

Related news
Decision on naming street after Kurmanbek Bakiyev to be canceled
Human rights activist Ondurush Toktonasyrov rallied against naming the street after the former Minister of Internal Affairs.

A similar scandal broke out in Nooken district of the country last weekend. A street was named after the fugitive president Kurmanbek Bakiyev. The Government called the decision illegal. It was also canceled after an outrage of the Kyrgyzstanis on social media.