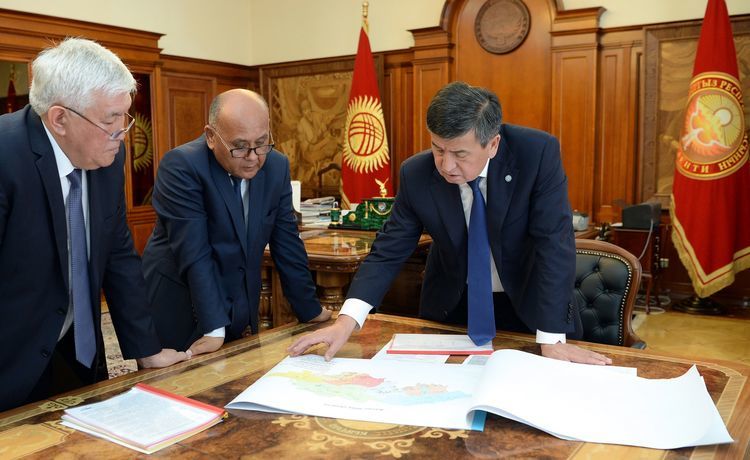 President of Kyrgyzstan got acquainted with implementation of projects on irrigation and providing the population with clean water. The Information Policy Department of the Presidential Administration reported.

Sooronbai Jeenbekov received the Director of the State Water Resources Agency Kokumbek Tashtanaliev and the Head of the Department for Development of Drinking Water Supply and Sanitation Askarbek Toktoshev. The current situation and problems of the water sector, activities and priority plans for reconstruction and expansion of the network of irrigation and drinking water supply systems of the republic were discussed.

The President stressed the need to step up efforts on attraction of grant funds for these purposes and quality implementation of all ongoing work. Construction of a drain siphon in Maksat village in Leilek district of Batken region with water supply to Arka massif was mentioned among major infrastructure projects for the next year.

This will allow introducing additional 1,800 hectares of irrigated land. Part of the funds from the required 1.9 billion soms will be planned in the republican budget for 2020. The remaining amount will be raised through international financial institutions.

Kokumbek Tashtanaliev said that 31 out of 46 irrigation facilities included in the state program for the development of irrigation were determined as a priority until 2023. As of today, work has been completed at two sites, reconstruction and construction are underway at 14 of them. The work is being carried out, among other things, at the expense of international development partners to reduce the burden on the state budget; design estimates have been prepared for other facilities to work out the issue with potential investors.

Askarbek Toktoshev told the head of state about active work to raise funds from international development partners for implementation of clean water projects, mainly from the European Bank for Reconstruction and Development, the World Bank, Islamic Development Bank.