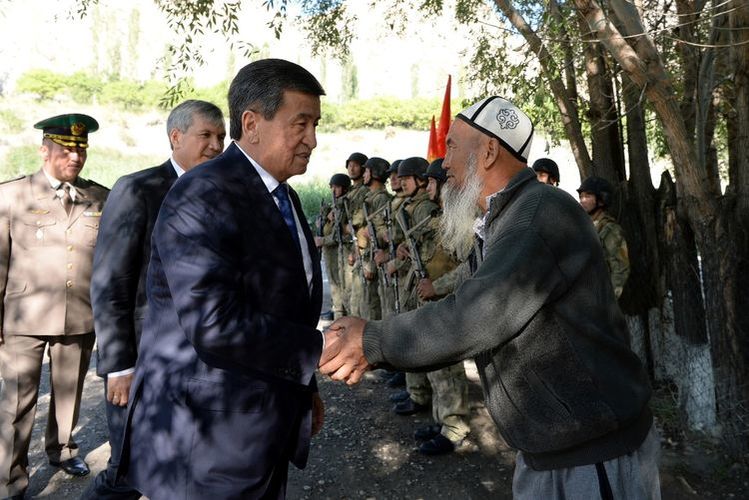 «Situation on the border in Batken region is under my personal control,» President of Kyrgyzstan Sooronbai Jeenbekov said at a meeting with residents of the region today.

He met with Ak- Sai residents on the way to Isfara (Tajikistan). The head of state recalled that the necessary instructions were given to law enforcement agencies, the Armed Forces, and heads of all ministries and departments.

«As of today, the situation has stabilized. Additional forces of the internal affairs agencies and the State Border Service were sent to the border in Batken region. You can see that the work was carried out promptly after our past meetings. The patrol work on monitoring the situation at the border will be permanent. The border will be completely under our control,» he stressed.

Sooronbai Jeenbekov noted that the number of soldiers and law enforcement officers in the villages located near the border was increased.

«Your security and the interests of our state are in the foreground. We are actively working on other measures to address all issues relating to the border. Yesterday, I held a working meeting with the participation of the Speaker of the Parliament, the Prime Minister and the heads of some state bodies. It was decided to start construction of social and infrastructure facilities in the near future,» he said.

The president explained that the construction of buildings for fire and rescue services would be completed in August, two special vehicles were allocated. Within two weeks, residents of border villages will be provided with a new ambulance. In addition, the destroyed bridge in Ak-Sai village will be restored, and the construction of a new pumping station will begin to provide the population with clean water. Measures will be taken to provide border areas with irrigation water. New schools will be built in some villages.

«Social issues will be resolved. I urge all of you not to be led by provocateurs. Work jointly with law enforcement officers. The Kyrgyz have been famous for their generosity and hospitality since ancient times. We must strive to preserve and strengthen good relations with the neighboring republic. Whatever the conflicts are, they will only bring harm,» Sooronbai Jeenbekov said.

Be patient and restrained. We will solve all the issues, it takes time. We must maintain peace and tranquility for the sake of future of our children, for the future of our country.