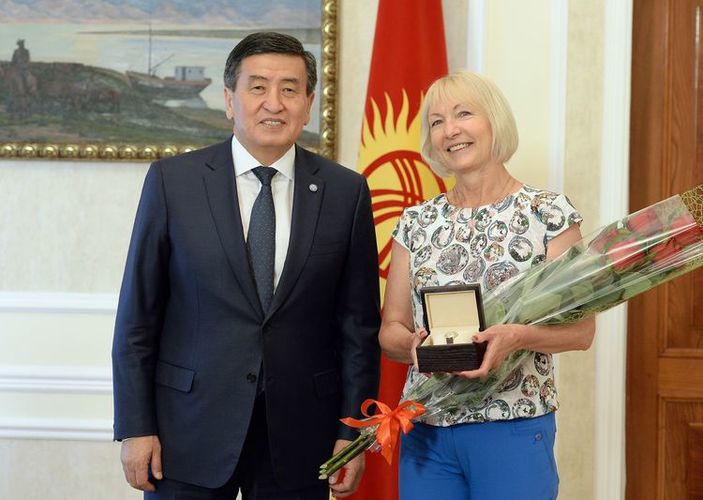 President of Kyrgyzstan Sooronbai Jeenbekov met today with the native of Kyrgyzstan, Honored Master of Sports of the USSR, long jump Olympic champion Tatyana Kolpakova. The Information Policy Department of the head of state reported.

The president expressed his gratitude for her visit to the country, as well as participation in the traditional international athletics tournament. Sooronbai Jeenbekov stressed that the international tournament, which has been held annually since 1997, is the evidence of Tatyana Kolpakova’s outstanding sporting achievements.

He expressed his deep appreciation for her contribution to the development of the republic’s athletics, the promotion of a healthy lifestyle and the transfer of sports experience to young Kyrgyz athletes. The head of state added that Tatyana Kolpakova’s sporting achievements motivate young people to achieve high results.

Sooronbai Jeenbekov presented Tatyana Kolpakova with engraved watch for her great contribution to the development of physical culture and sports in the country.

In her turn, the Olympic champion herself stressed that she has always warmly responded and remembered her native Kyrgyzstan, where she grew up and where the years of her development as a professional athlete have passed.

Sooronbai Jeenbekov and Tatyana Kolpakova positively assessed the achievements and successes of young athletes of the republic and exchanged views on measures for further development and involvement of the young people in this sport.