Former head of state Almazbek Atambayev was summoned for questioning within the case on unlawful release of Aziz Batukaev as a witness. Lawyer Sergey Slesarev told 24.kg news agency.

According to him, he, as a representative of Atambayev’s interests, sent a letter to the Investigative Department of the Ministry of Internal Affairs asking for clarification of the grounds on which Almazbek Atambayev was summoned if he has immunity. 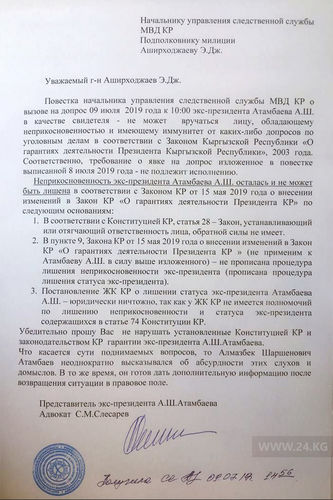 «But the Interior Ministry got off with a formal reply. The Investigative Department referred to the decision of the Parliament on depriving Atambayev of his status of ex-president. But what have the immunity and status to do with it? I asked the Interior Ministry to appeal to the deputies for an explanation of the adopted document,» said Sergey Slesarev.

He added that Almazbek Atambayev has every right not to attend these conversations in law enforcement agencies, because no one is allowed to interrogate him.

Recall, Parliament lifted immunity of the former president. He was charged with five offences, including the unlawful release of the kingpin Aziz Batukaev and corruption.