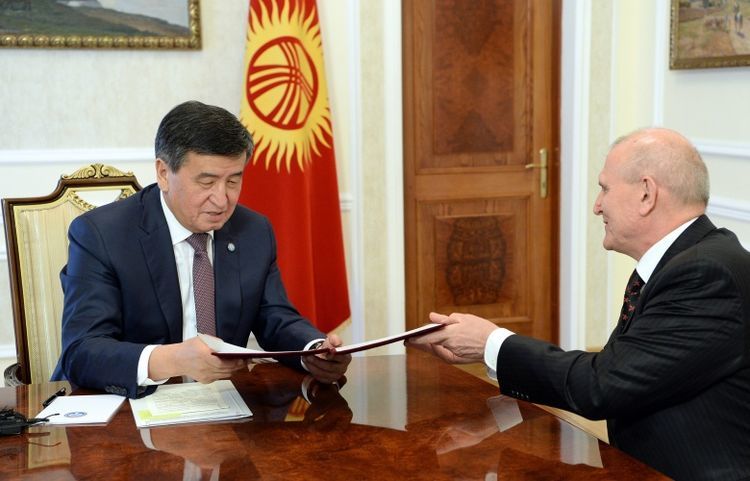 President of Kyrgyzstan Sooronbai Jeenbekov received the Ambassador of the Russian Federation to Kyrgyzstan, Nikolay Udovichenko. Press service of the President of the Kyrgyz Republic reported.

The head of state expressed condolences over the plane crash at Sheremetyevo airport, which resulted in death of 41 people.

Related news
Victory Day. Events planned in Bishkek announced
«We are meeting on the eve of a great holiday — the 74th anniversary of the Victory in the Great Patriotic War. Our fathers and grandfathers showed heroism, indomitable will, readiness for self-sacrifice and endless love for the Motherland. One of the clearest examples of the fact that our peoples are united by a feeling of great pride for the heroic feat of the front line soldiers and home front workers is Immortal Regiment march. Tens of thousands of citizens of Kyrgyzstan annually participate in this glorious march, this year it will be held throughout our country,» the president said.

Nikolay Udovichenko conveyed to Sooronbai Jeenbekov congratulations of the President of the Russian Federation Vladimir Putin on the Victory Day.

He briefly told about his work as an Ambassador, within which he visits the regions of the republic, and noted that he would make every effort to strengthen bilateral cooperation.

Sooronbai Jeenbekov and Nikolay Udovichenko exchanged views on the implementation of the agreements reached on the results of Vladimir Putin’s state visit to Kyrgyzstan and events in the framework of the upcoming SCO summit in Bishkek in June.