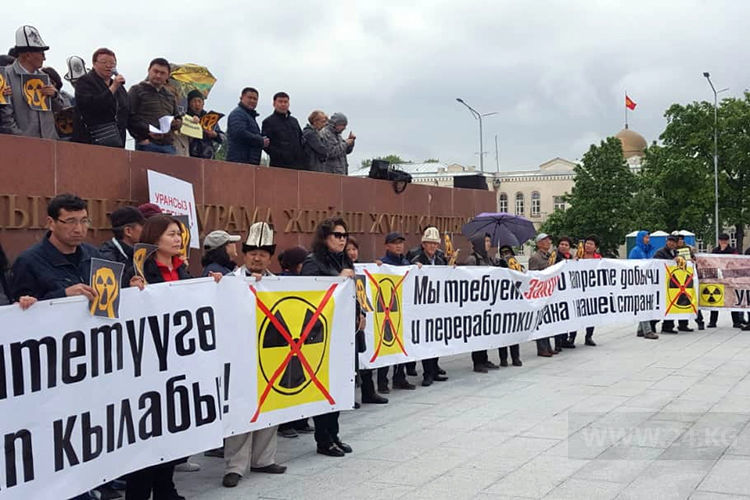 Rally against uranium mining was held in Bishkek on Ala-Too square.

About 300 people participated in the protest at Tash-Bulak field in Kyzyl-Ompol village, Issyk-Kul region. Participants of the protest demanded to stop the development of uranium deposits throughout Kyrgyzstan.

Aziza Abdirasulova, head of Kylym Shamy Public Foundation, stressed that women and children suffer from the uranium deposit in Mailuu-Suu.

«Because of uranium, even unborn children receive radiation. In particular, there are results of examination of stillborn babies, which says that uranium particles were present in the placenta of the babies,» she said.

Recall, YurAsia is going to develop Tash-Bulak deposit of Kyzyl-Ompol group of uranium-thorianite placers. It is planned to process it at Kara-Balta Mining Plant. However, residents of Ton district of Issyk-Kul region strongly oppose the project. After a wave of indignation, the Prime Minister ordered to suspend any work at the field until conclusion of a special commission.

Representative of the investor Andrey Akimov told reporters that, after the protests, the company suspended all work in the republic until the situation changes.