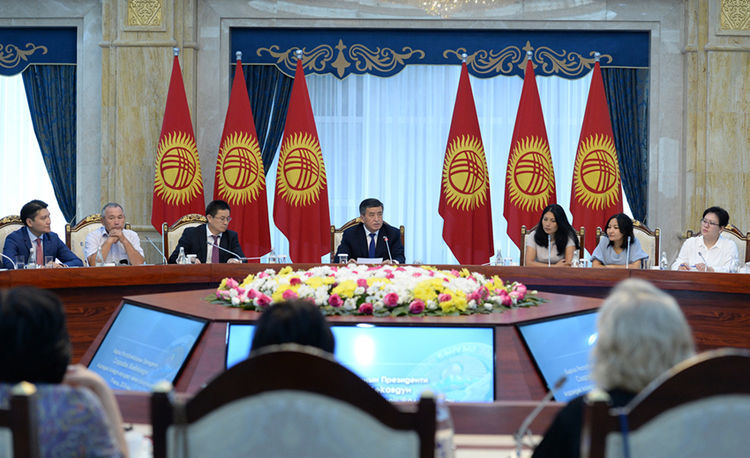 The President of the Kyrgyz Republic Sooronbai Jeenbekov met with the representatives of the civil society. The press service of the head of state reported.

The President noted that regardless of the sphere where a person works, in the non-governmental sector or in a state agency, the goal should be one — development of the state, improvement of people’s life, work for the benefit of the future of Kyrgyzstan.

«Close constructive communication between the state bodies and civil society creates prerequisites for open voicing of the problems and goals. Such cooperation is the basis for successful work,» said Sooronbai Jeenbekov.

He expressed the wish that representatives of civil society should direct all their knowledge, experience and energy to creation for the sake of the people’s interests; they should be more active not only in political issues, but also in solving other problems of the country.

We all have one mission — the development of Kyrgyzstan, the strengthening of its independence, freedom, democratic values, consent. As the great writer Chingiz Aitmatov said: «We are all in the same boat.» Our boat is Kyrgyzstan.

He noted that a strong civil society has appeared recently in Kyrgyzstan, and this is an achievement that one can be proud of. This potential needs to be preserved and strengthened in the interests of the state.

«We are ready to work with the civil sector, to be partners, we are open for constructive ideas and criticism,» the president said.

«National accord is our top priority. A big role in this important matter belongs to representatives of civil society. I want to call you to support me in not only strengthening of peace and harmony in our country, but also in uniting all the best forces, mobilization of all our resources to build a prosperous state with fair power and consent society,» said Sooronbai Jeenbekov.

Touching upon the fight against corruption, the head of state noted that it should not turn into «campaigning.»

Sooronbai Jeenbekov dwelled on the judicial reform, noting that its implementation was a very serious task, requiring strength and strong will, since this reform will put a barrier to many corrupt officials. The assistance of civil society is also needed in this struggle.

«I know that many civil activists work in the regions. The state also needs your help in this sphere. It is vitally important for us to promote social, development projects, citizens’ initiatives. I hope that we will jointly work in this direction,» said Sooronbai Jeenbekov.