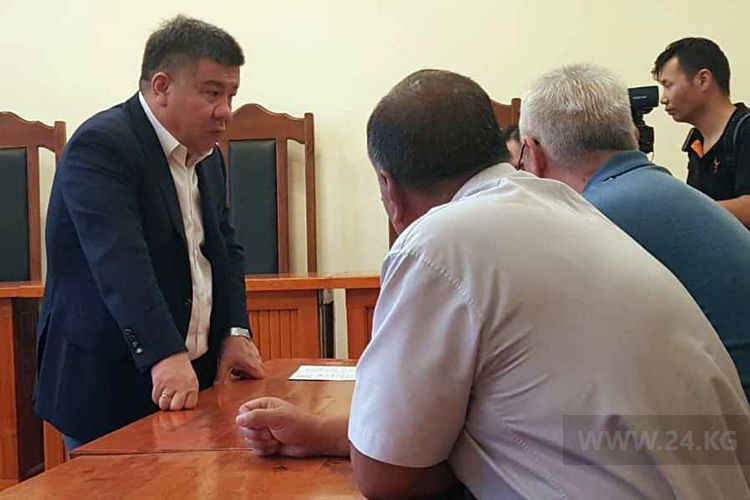 Trial of the criminal case against the member of the Parliament Almambet Shykmamatov continued in the Bishkek City Court.

His lawyer, Chinara Dzhakupbekova, filed a request for the return of the criminal case for further investigation.

The defendants supported the lawyer, the prosecutors opposed it.

The Board for Criminal Cases of the Bishkek City Court granted the lawyer’ request. Thus, the verdict of the Pervomaisky District Court was abolished, the case was sent for further investigation.

On February 17, 2017, a criminal case was initiated against the former auditor of the Accounting Chamber Almambet Shykmamatov. According to the Prosecutor General’s Office, he included his wife’s car in a tender, selling it to the winner of the tender — Barat Lux Company — for $ 13,500. The Prosecutor General’s Office believes that the real price of the car at that time was about $ 10,000. The first instance court, having found the defendant guilty, sentenced Almambet Shykmamatov to a fine of 5 million soms.

Construction of houses for families of killed in conflict starts in Batken
News brief
12 May, Wednesday
14:40
World Bank supports revision of electricity tariffs in Kyrgyzstan World Bank supports revision of electricity tariffs in...
14:27
Kyrgyzstan lacks about 1,000 family doctors
14:13
Electronic patient records to appear in Kyrgyzstan by end of 2021
13:58
Mudflow sweeps away and kills eight-year-old boy in Uzgen district
13:46
Nationalization of Kumtor: Parliament to hold extraordinary session
13:34
China to provide Kyrgyzstan with COVID-19 vaccines, $ 54 million grant
12:11
Glacier epic: How not to freeze economy of Kyrgyzstan
10:30
COVID-19: Residents of what countries can arrive in Kyrgyzstan
10:21
Global slowdown in grain price growth eases pressure on prices in Kyrgyzstan
09:59
Cabinet of Ministers suggests own variant of protection of entrepreneurs