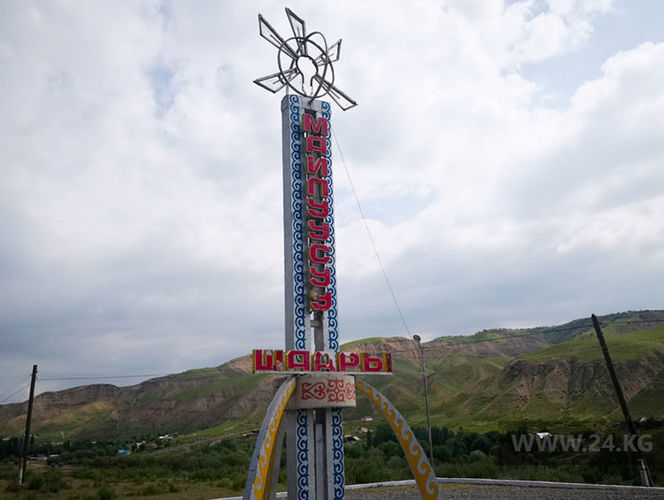 Tailing dumps in Central Asia were closed from 1966 to 1973, but they are still dangerous. Mailuu-Suu town belongs to the seven most dangerous uranium heritage sites. Correspondent of 24.kg news agency visited the town to understand why it poses a threat to the entire Fergana Valley.

Mailuu-Suu is located high in the mountains. There are the mountains and greenery all around. Оnly the persistent odor of radon, which appears already at the entrance to the town, says that it is dangerous to health to stay there.

At the first glance, there is no problems in the town. People go to work, children quietly return home from school, kids are running along the streets. Only ramshackle buildings catch the eye. These are the remnants of former prosperity and welfare.

In fact, this silence and tranquility are imaginary. The radiation background in some parts of the town exceeds the norm by tens and hundreds of times. But people continue to live here.

Uranium mines in Mailuu-Suu were exploited in 1946-1967. At that time, the USSR was actively developing nuclear weapons. There is a legend that the first Soviet atomic bomb was created from the uranium mined in Mailuu-Suu.

«After the collapse of the USSR, many protective structures dilapidated to critical condition due to lack of control. But in the last 10 years, the state pays much attention to physical protection of radioactive waste sites. Every year, 15-20 million soms ($ 200,000-250,000) are allocated from the budget,» Damir Kushbakov, Director of the Agency for Management of Tailing Dumps under the Ministry of Emergency Situations, told.

Since November 2017, the German consortium Wisutek has been operating in Mailuu-Suu. Its specialists carry out research, engineering surveys, sampling of soil and water in the town and in the territory of tailing dumps. They also conduct radiological studies.

«We are trying to understand how the tailing dump is arranged. We make a small hole, then galleries, where the waste is located. The problem is that most of the tailing dumps are in ruins and have not been in operation for a long time. They pose a threat to the population not only of Mailuu-Suu, but also the neighboring Uzbekistan. Now we are conducting research and measurements to understand, including, what is the level of radiation here, how dangerous the mines are and how to reduce this danger,» said representative of the consortium Christian Kunz.

Mailuu-Suu tailing dumps are located in the landslide-prone zone. In the case of natural cataclysms, they can be washed away, and toxic substances will get into the river. As a result, the Fergana Valley, where 14 million people live, will be affected.

The threat is quite real. Last year, a landslide of 2.5 million cubic meters came down and blocked the Mailuu-Suu river at the tailing dump No. 7. The water did not reach the mine only by 12 meters.

Good luck saved the people from a disaster. The water washed out the mud mass of the mudflow and went downstream along the river.

Workers, who study uranium mines, tell that they have a competition for finding a piece of stone with the highest radiation level. Up to date, a record is a stone with a radiation background of 1,500 microroentgen per hour. The norm is not higher than 30 microroentgen.

When the third mine was moved, the workers found pieces of rock with a radiation background of 8,000 microroentgen.

The European Union has allocated for Mailuu-Suu a grant of €3,150,000 for a comprehensive assessment of the impact of uranium heritage on the environment and the public health. There has never been such a large-scale project.

After the adoption in 2013 of the UN Resolution on the role of the international community in the prevention of radiation threats in Central Asia, a Strategic Master Plan was developed. It provides for risk assessment, options for restorative measures and an estimate of the implementation of a comprehensive program for the restoration of the territory of former uranium mines. The program included seven of the most difficult sites in Kyrgyzstan (Min-Kush and Mailuu-Suu towns, Shekaftar village), in Uzbekistan (Yangiabad and Charkesar cities) and Tajikistan (Isktiklol and Digmai cities).

In total, the reconstruction of the seven most dangerous sites requires €85 million.

About €30 million are needed to reclaim the tailing dumps in Mailuu-Suu. Today, the trust fund, managed by the European Bank for Reconstruction and Development (EBRD), has €16.5 million. The international community should find other €70 million in the next couple of years.