Sooronbai Jeenbekov about his promises and demands of people of Kyrgyzstan

The President of Kyrgyzstan Sooronbai Jeenbekov addressed Kyrgyzstanis on the occasion of the April People’s Revolution Day. The Information Policy Department of the Presidential Administration reported.

«The history of the Kyrgyz people is rich in vivid examples of universal heroism and victory, when the people unite and demonstrate an unshakable will to achieve the cherished goal, demonstrating the hardwired love and desire for freedom and independence. The People’s Revolution on April 7, 2010 is one of such significant events,» the statement said. 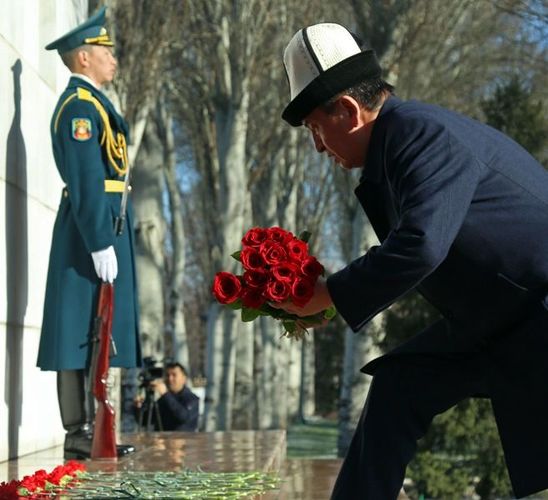 «A historic turn to the bright future from the path, leading the country to a dead end, was made exactly on this day. We have once again demonstrated to the whole world that the people of Kyrgyzstan highly respect the ideals of justice, will never kneel down and will not tolerate family-clan rule. Our heroes sacrificed their lives for the sake of a bright and dignified future of the people. They became its reliable support, an unshakable pillar,» the president said.

Thanks to the brave heroes, who became the bulwark of the Kyrgyz people on April 7, 2010, the dream of the people striving for a brighter future and for a new life was fulfilled. A worthy response was given to those, who wanted to usurp power, to seize the people’s property and enslave people.

«On this day, we pay tribute to our heroes, express our condolences and say words of gratitude to the parents and relatives, who brought them up. Their bright image will forever remain in our hearts, and heroism will be an example for young people, for the younger generation. Their names will never be forgotten and will remain forever in our hearts,» the president said.

Years after the events of April 7 became similar to the whole century, the way to national revival was opened.

«Statehood has strengthened, major political changes have taken place. Free, democratic elections were held. Kyrgyzstan demonstrated to the world that it is a true democratic country. Major projects in the economy and the social sphere have been implemented. But we still have many tasks ahead of us. Our goal is precise and clear: not to turn off the path of development, to develop Kyrgyzstan as a country for comfortable life and work, to make it a free, legal and strong state.

Having achieved this goal, we will preserve the victory of the April revolution, the power of the people, fulfill the promises made to the people and meet the people’s demands. We will realize the ideas and goals of the people’s revolution. Most importantly, Kyrgyzstan will never turn away from the democratic path of development,» the statement said.

Sooronbai Jeenbekov wished welfare and light to the people, consent — to the society, peace and prosperity — to the Motherland.