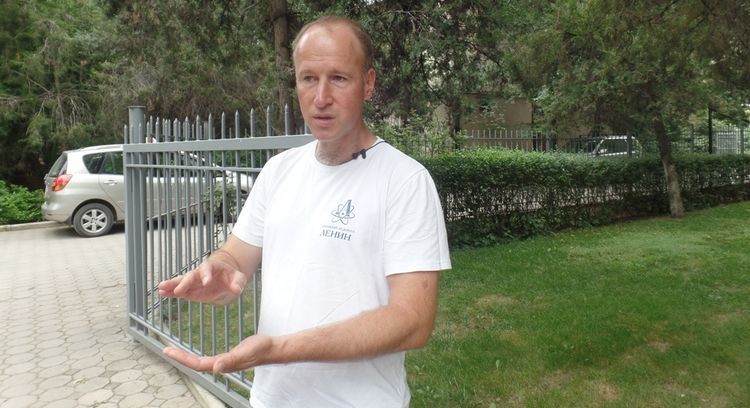 The Parliamentary Committee on Agrarian Policy, Water Resources, Ecology and Regional Development approved in three readings amendments to the Water Code of Kyrgyzstan. If the Parliament supports colleagues at the general meeting, the amendments will allow miners to mine gold near the glaciers in exceptional cases and, first of all, facilitate the development of the largest mountain Kumtor field.

As expected, the approval of the document by the deputies caused dissatisfaction of certain experts in : the economy is good, but what about the long-suffering glaciers? The leading research worker of the Department of Cryolithology and Glaciology of the Geography Department of the , PhD in Geography Dmitry Petrakov, who participated in scientific works at Kumtor deposit and the largest glacier of Tien Shan — , together with Kyrgyz glaciologists, told about their state now and what will happen to them in future.

«Obviously, any production activity, especially the extraction of minerals, is harmful to nature,» the specialist says. «But if we consider not only the ecological issue, but also from the common sense, Davydov and Lysyi glaciers occupy less than 0.33 percent of the total area and volume of glaciers in Kyrgyzstan. Therefore, when we talk about the scale of damage to the glaciers of the country, this is a negligible figure.

Global warming in Kyrgyzstan annually «consumes» 2-3 times more ice than it was in Davydov and Lysyi glaciers 30 years ago, before the development of Kumtor field.

— Are there any fears that the company’s activities will eventually lead to the complete destruction of these glaciers?

— Complete destruction of Davydov glacier is out of question. Work on the movement of ice, which is stored in the glacier, continues on its part. The upper part of the Davydov glacier is preserved, and as far as I know, it is not going to be touched, as it is not necessary. Secondly, the steepness of the slopes of the upper part of Davydov glacier does not imply mining operations because of technical and security constraints. Excavation of ice on Lysyi glacier is not carried out, and any person can be convinced of this by looking at the public space images made in summer and autumn of 2017. 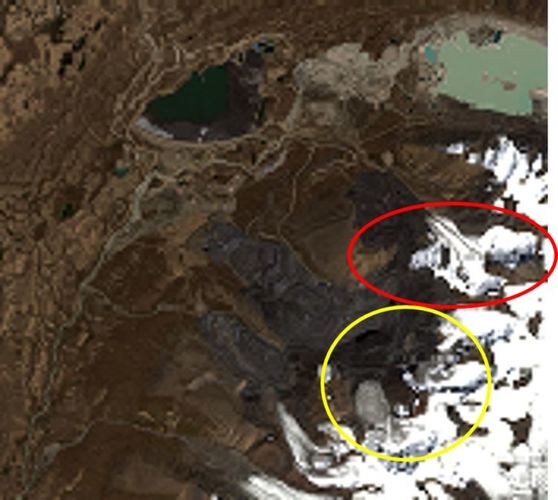 Photo Space image Sentinel on August 31, 2017. Lysiy glacier is marked in red, there is no work on it. The black spot beneath is the ice unloading zone, which is moved from Davydov glacier, which is marked in yellow. In the upper part, all three of its branches, they are not going to be completely removed. In place of the tongue is the quarry, below it is the dump zone, which also has ice

— Can the consequences of this intervention come out on a global scale? How will this affect the region?

— There will be absolutely no influence on the region. It is clear that this will affect the terrain within a radius of hundreds of meters from the glaciers, the microclimate can change a little, and that’s it. Since 2003 to 2013, glaciers of Ak-Shiyrak massif lost more than 20 square kilometers of the area, and more than 90 percent of the ice melted under the influence of climate change.

If climate change scenarios realize, by 2100 the area of ​​glaciation of Ak-Shiyrak massif will reduce by 80 percent.

— What is the contribution of blasting operations at Kumtor and its environs to the acceleration of negative processes?

— In 2016, we completed the work on measuring the albedo (reflecting ability of glaciers — Note of 24.kg news agency) and determining the degree of influence of production, including blasting works at Kumtor, on this indicator. The space images were analyzed, various coefficients were calculated, obtained data were compared with ground-based measurements, which were made using a modern high-precision instrument specially designed for such works. We came to the unexpected conclusion that the company’s influence on the albedo is not traced, of course, within the accuracy of the instruments.

The accumulation of aeolian deposits, that is, the dust brought by the wind, on syrts, as Soviet scientists have calculated, is about a millimeter a year. If we take as a basis the assessment of the expert Isakbek Torgoyev on calculation of the volume of dust emissions from explosions and recalculate the whole area of ​​Ak-Shiyrak, then against the background of the natural component, we will again receive an anthropogenic contribution of less than 1 percent.

Yes, there is dusting of glaciers, it is significant, but due to the dust from the deserts, which are far from the snowy peaks of Tien Shan. The winds bring hundreds times more dust to the glaciers than Kumtor.

Now we are analyzing more recent images in order to estimate the situation again with the help of other approaches. The task is to study the degree of dustiness in the winter.

— You are a frequent guest in , love to visit us, conduct scientific work with your Kyrgyz colleagues. What impression do you have? Is the country really barbaric about natural resources in comparison with other states, the same , where, as they say, they cherish nature and conserve it?

— What does the barbaric attitude to nature mean? The garbage, which is scattered all over the shore, is not less barbarous. You will not see this in the same . But you will see large-scale mining projects, including in the glacial zone, there. Glacial ice was removed from 1964 to  mining copper ore. In 2014, the mining project Kerr-Sulphurets-Mitchell was approved, by the way, located in , during which it is planned to blacken the glacier in order to accelerate its melting and reduction. And the role of these projects in the economy of  is much less than the role of Kumtor in the economy of . Nevertheless, the Canadian authorities made progress in the implementation of such a project.

If there was an enterprise annual production activity of which was estimated at 8 percent of GDP, and it would have had to destroy part of the glacier for the sake of increasing the country’s GDP, no one would stop its work. Glaciers in  are also melting due to global warming. But they can afford to leave part of the natural reserves for the future and start developing them, so to say, in 50 years, when their extraction will be much cheaper. All these are economic aspects.

You can talk about ecology and natural wealth ​​as much as you like, but there is another aspect — how to raise the country’s economy, how to pay salaries to doctors, teachers, how to provide old people with pensions?

In addition, significantly replenishing the country’s budget, one can allocate more money for environmental activities. Each country, considering all the pros and cons, chooses what is more important for it.