What Almazbek Atambayev and Shavkat Mirziyoyev discuss after talks 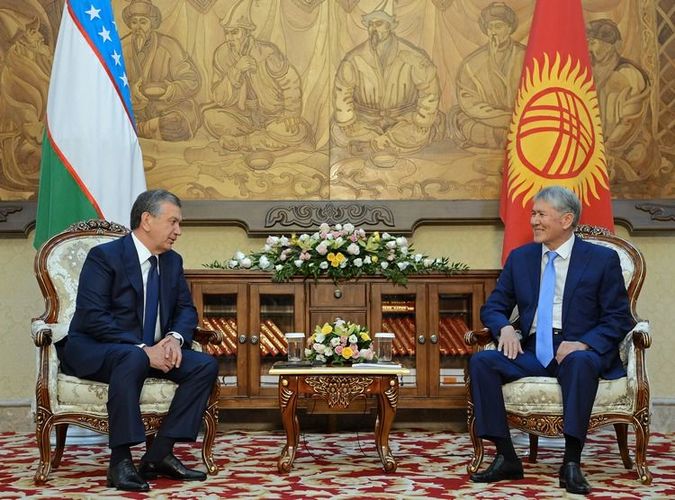 The meetings of the President of Kyrgyzstan Almazbek Atambayev and the head of Uzbekistan Shavkat Mirziyoyev in a narrow and expanded form ended. The heads of state told journalists what they had agreed on.

According to Almazbek Atambayev, the agreement on the Kyrgyz-Uzbek border signed today includes 85 percent of the state border. The head of  is sure that on this example the parties are sure that if they want and have the political will they always can come to agreement.

This day two peoples have been waiting for more than 25 years. And this is the merit of Shavkat Miromonovich. Our countries should have fraternal relations. We once were a single state — the Kokand Khanate. Until 1991, we had no borders at all, and when they appeared, it became a problem and a tragedy for many residents.

«There were many problems in our relations, sometimes artificial, sometimes organized by outside forces, by intelligence services. But, thank God, everything bad ends one day, and changes come. We found mutual understanding on all issues. We decided that prior to my visit to , which I hope will be in October, we will implement today’s agreements,» Almazbek Atambayev said.

He added that the spirit of brotherhood between presidents should extend to the borders.

In his turn, the President of Uzbekistan noted that for a long time not much depended on the presidents of the two countries. But now the situation has changed: states are restoring a common history.

For 25 years not a single kilometer of the border have been described, and now less than a year — 85 percent. We have subtle, unconventional issues. Many of them we solved. We came to the conclusion that we must solve problems for the sake of future and security. I went to it scrupulously and withstood. It’s not place for emotions, only the mind. Today the mind prevails.