World wrestling champion Aisuluu Tynybekova admitted that she received a car from the kingpin Kamchi Kolbaev. She wrote about it on her Instagram.

«Today I would like to write about a brother Kamchi Kolbaev, who supported me all this time. I decided to tell about his gift. After a successful performance at the 2017 World Championship in Paris, he presented me with a new Toyota C-HR car. To be honest, that year I suffered injury and was depressed, but you (Kolbaev) are the only one who supported and motivated me to conquer new heights. Thank you for all your support,» the champion wrote.

Earlier it was reported that Aisuluu Tynybekova received the keys from the 2018 Toyota C-HR car from the Vice President of the Women’s Wrestling Federation Dinara Isaeva. Then Isaeva noted that the athlete deserved the car for winning a bronze medal at the 2017 World Championship. 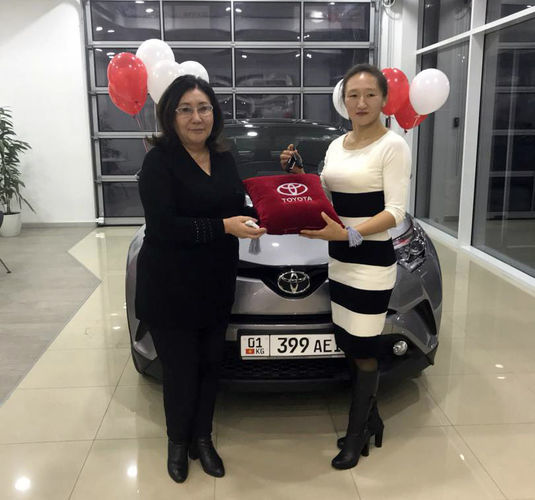 Kamchi Kolbaev was detained on October 21. He was handed a notice of suspicion under the Article «Creation of a criminal organization or participation in it» of the Criminal Code of the Kyrgyz Republic. By the decision of the Pervomaisky District Court, the kingpin was placed in the detention facility of the State Committee for National Security until the end of the investigation.
link: https://24.kg/english/179271/
views: 404
Print
Related
Japarov about Kolbaev’s case: U.S. is pursuing double standard policy
U.S. Department of State increases reward for information about Kolbaev
USA deeply concerned by release of crime boss Kamchybek Kolbaev
Crime lord Kamchi Kolbaev released
Aisuluu Tynybekova wins gold at International Wrestling Tournament in Kyiv
Crime boss Kamchi Kolbaev to stay in prison colony 47 until March 22
Aisuluu Tynybekova named best athlete of World Cup
Aisuluu Tynybekova's best throws at World Cup in Serbia in one video
Brother of Kamchi Kolbaev becomes President of Judo Federation
Aisuluu Tynybekova wins gold medal at World Wrestling Cup
Стоимость акций Центерры на бирже в Торонто (TSX)
на 14.04.2021
USD 9,28