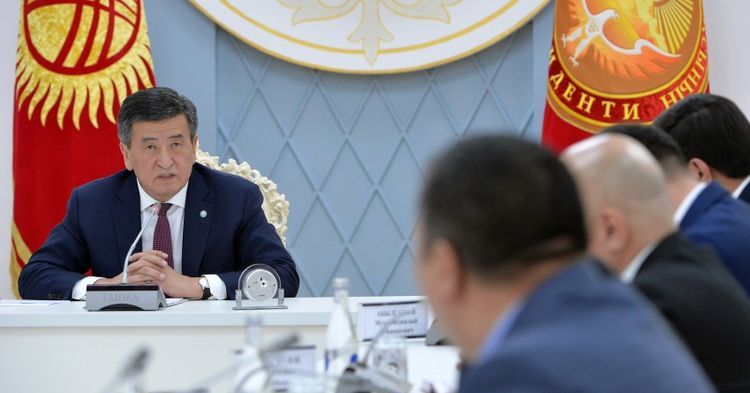 Population census was postponed for a month. It was announced today at a meeting of the President of Kyrgyzstan Sooronbai Jeenbekov with the Speaker of the Parliament Dastanbek Dzhumabekov, the Prime Minister Mukhammedkaly Abylgaziev and heads of parliamentary factions. Press service of the head of state reports.

In addition, the situation with coronavirus was discussed at the meeting. The head of state noted that Kyrgyzstan, along with the international community, faced a serious test — the first cases of coronavirus were registered in the country.

Sooronbai Jeenbekov stressed that maximum measures are being taken to prevent further spread of the virus; an emergency situation regime was introduced in Suzak district; two republican emergency response centers are actively working.

«The situation is completely under control. Relevant decisions were made in a timely manner at the meetings of the Security Council, which are currently being implemented. A large group of doctors worked hard to prevent infection from entering the country. Good work has been done to ensure economic security and prevent the disease. We express our gratitude to everyone who carried out this work and wish further endurance. But there are also shortcomings, work must be done to eliminate them,» Sooronbai Jeenbekov noted.

The President called for support for around-the-clock working doctors and those, who ensure economic security of the country.

«It is very easy to criticize activities and give instructions to the republican emergency response centers. But now is not the time to be carried away. We all must provide real help to the people,» he said.

The head of state added that government agencies have taken active measures to curb the activities of unscrupulous traders in the economic sphere, who, taking this opportunity, wanted to enrich themselves by raising prices.

The most important thing now — I urge not to allow political speculation.

Speaker Dastanbek Dzhumabekov, heads of the factions also noted the painstaking work of the country’s doctors in the fight against prevention and detection of coronavirus, expressed their proposals for the further cohesive work of all branches of government. It is also reported that one of the factions decided to transfer their monthly salaries to assist doctors.

Participants of the meeting noted that every citizen of the country should take all measures to preserve their health and the health of the people around with all responsibility.