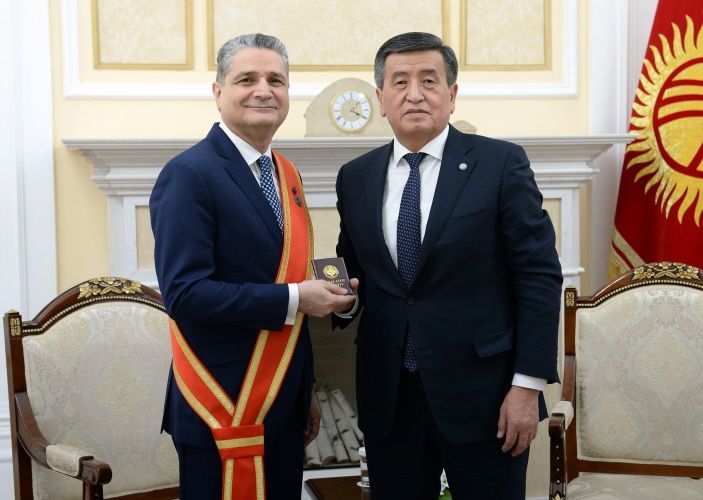 President of Kyrgyzstan Sooronbai Jeenbekov awarded the Chairman of the Board of the Eurasian Economic Commission (EEC) Tigran Sargsyan with Dank medal. The Information Policy Department of the Presidential Administration reported.

Sooronbai Jeenbekov noted that the past 2019 turned out to be full of major events that were timed to coincide with the fifth anniversary of signing of the Treaty on the Eurasian Economic Union and the 25th anniversary of the idea of ​​Eurasian integration.

The President stressed that today, the EAEU is positioned as one of the youngest and fastest growing integration associations, and many key economic indicators of the member states are improving.

«During the period of Tigran Sargsyan’s chairmanship in the EEC, the issue of approving the results of assessment of the veterinary control system of Kyrgyzstan was settled, the pension agreement issue was resolved, a number of other important decisions on Eurasian integration issues were positively reviewed and adopted,» the head of state recalled.

In his turn, Tigran Sargsyan expressed gratitude for the support provided to him throughout his activities. He stressed that the initiatives taken by Kyrgyzstan within the framework of the EAEU took into account the interests of all member countries of the union.

Recall, the term of office of the current chairman of the EEC Board, Tigran Sargsyan, ends on February 1, 2020.