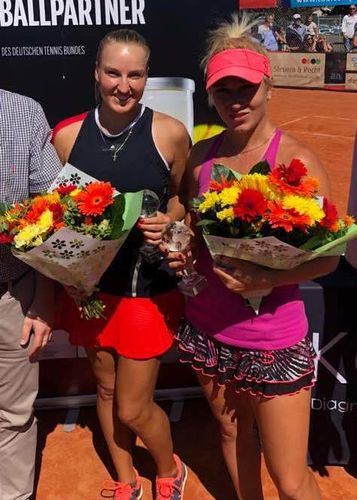 on August 12 in Hechingen (Germany). The International Tennis Federation reported.

In the singles, the domestic tennis player dropped out of the fight in the first round of the qualifying match, losing to Katarzyna Peter (Poland) — 0: 6, 1: 6. In the doubles, Palkina played in a duet with Sofya Shapatava (Georgia). At the start, they defeated Eleni Danilidu (Greece) and Federica Prati (Italy) — 6: 0, 6: 2. In the quarterfinals, they performed better than the Croatians Tena Lucas and Theresa Mrdegy — 6: 3, 7: 5.

In the semifinals, Palkina and Shapatava defeated Julia Gatto-Monticone (Italy) and Michaela Gonchova (Slovakia) — 6: 4, 6: 2. In a decisive fight, the Kyrgyz-Georgian duet did not cope with Polina Monova (Russia) and Chantal Shkamlova (Slovakia) — 4: 6, 3: 6.