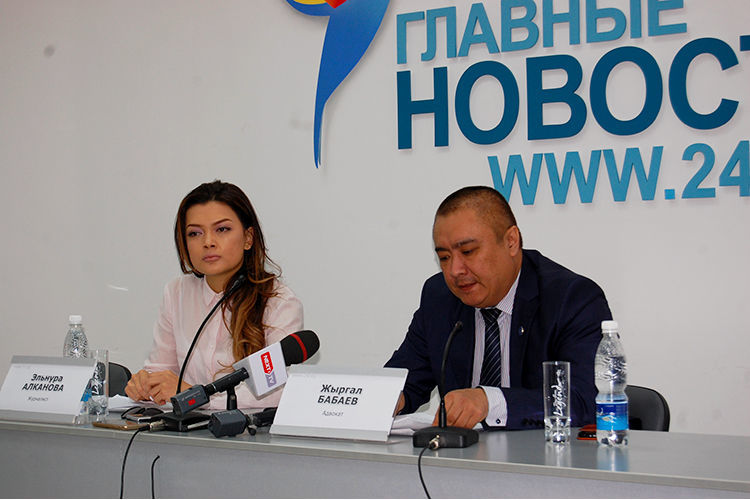 The criminal case against journalist Elnura Alkanova was opened illegally. Her lawyer Zhyrgal Babayev stated this at a press conference in 24.kg news agency.

According to him, after the published material about Ideal House LLC, Elnura Alkanova was summoned as a witness to the State Committee for Combatting Economic Crimes. There she was asked to voice the source of information.

«Referring to the Law On Mass Media, my client did not disclose the source of information. Later, with respect to Alkanova, the investigative team put up a restrictive card under which the journalist can not leave the country. We appealed to court. After the court demanded the materials, the State Committee employees lifted the ban and we reached an agreement,» Zhyrgal Babayev said.

After a while, according to the lawyer, Alkanova was again summoned to the Financial Police and charged under the articles «Illegal Receipt of Information» and «Disclosure of Banking or Commercial Secrets» of the Criminal Code of the Kyrgyz Republic.

«I believe that there is no crime in the actions of my client. The information she published is not a commercial secret. She was summoned to the State Committee for Combating Economic Crimes unjustifiably and was charged without grounds. The accusation itself is illegal, because my client did not give information divulging trade secrets in the material. What is the illegality of obtaining information? This involves collecting information illegally from a computer, bribing the source. She was given open information, she used it,» the lawyer added.

The journalist Elnura Alkanova published a material in which she tried to find out who got the cottages of Maxim Bakiyev and who is behind the scandalous deal, which, according to the deputies of the parliament, caused damage to the state for at least $ 10 million. Ideal House LLC was sold for 142 million soms. Bids were received from Business Pro LLC and VostokTechKomplekt. The starting price was 130 million soms. The object was purchased by the second participant for 142 million soms.

Recall, sale of Ideal House LLC failed several times because of the passivity of the participants.

Ideal House LLC is Maxim Bakiyev’s project. He, using his position, registered the company as an owner of several hectares of land near the State Residence Ala-Archa-1. Elite cottages were erected on the land plots. After April 7, 2010, the objects were nationalized.