UN: There are about 400,000 malnourished people in Kyrgyzstan

400,000 people or 6.4 percent of the population in  are malnourished. This is stated in the report «Status of food security and nutrition in Europe and  — , presented by the UN Food and Agriculture Program (FAO).

The UN Division noted that, compared to 2005, the countries of the region have made «significant progress in combating the reduction of malnutrition, but now the situation in the region is in stagnation — the indicators remain unchanged.» The exception is , where the situation worsened: if in 2005 4.6% of the population were malnourished, then in 2016 their number increased to 5.5%. 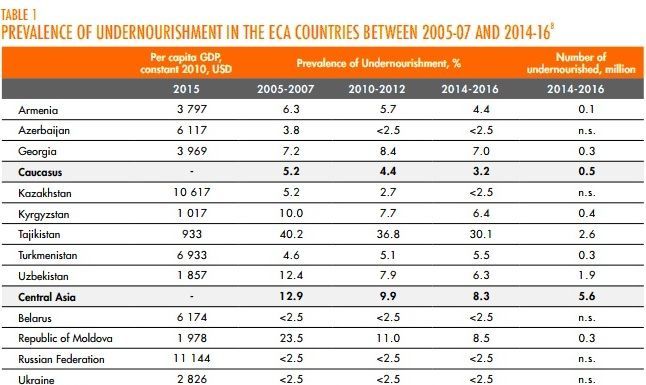 link: https://24.kg/english/70132/
views: 341
Print
Related
UN to allocate $ 25 million to Kyrgyzstan to cope with post-COVID-19 crisis
Foreign Ministry asks UN to increase assistance to Kyrgyzstan due to COVID-19
UN call on Sadyr Japarov to respect the Constitution and human rights
UN Secretary-General's Special Representative to arrive in Bishkek
UN considers Sooronbai Jeenbekov as representative of constitutional authority
UN concerned about attacks on objects of foreign investors in Kyrgyzstan
UN Secretary-General is closely monitoring situation in Kyrgyzstan
UN Secretary-General: There is no end in sight to the spread of the virus
UN Chief: COVID-19 pandemic is out of control
President of Kyrgyzstan speaks at anniversary session of UN General Assembly
Стоимость акций Центерры на бирже в Торонто (TSX)
на 27.11.2020
USD 9,38

Tolkunbek Abdygulov: We are doing everything to stop sharp depreciation of som