Group from Kyrgyzstan takes part in folklore festival in Italy 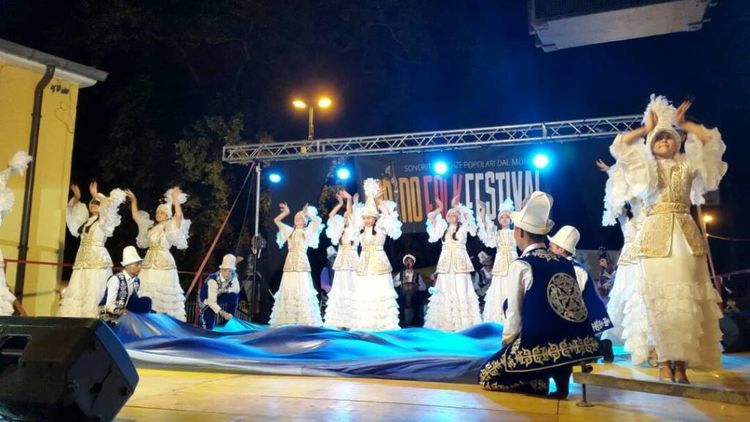 The group from took part in the folklore festival «Peoples Meet» in , the press service of the Bishkek mayor’s office reported.

According to it, at the invitation of the Union of International Organizations of Folklore Festivals (CIOFF) in  under UNESCO, a delegation from arrived, which was formed from two groups — the vocal and choreographic ensemble «Adis» and the folk ensemble «Nur» of the children’s art school No.4.

The Italian audience became more familiar with the culture, traditions and national costumes of . During the festival, compatriots living in  came from different cities to support and greet the artists.

The artists performed on stages of several cities.

The festival is attended by groups from Africa, Europe, Latin America and .

COVID-19: Who and how can enter Kyrgyzstan or leave the country
News brief
23 September, Wednesday
15:17
Toguz-Toro resident detained for illegal possession of firearms Toguz-Toro resident detained for illegal possession of...
15:09
President of Kyrgyzstan speaks at anniversary session of UN General Assembly
13:54
Kyrgyzstanis stuck at Russian border to be evacuated tomorrow
13:40
Bishkek, Tashkent to cooperate in trade, economic and cultural spheres
13:11
Rally “Against All” takes place on Ala-Too square in Bishkek
12:30
Asia News has to pay Interior Minister 300,000 soms by court decision
12:09
Number of infected with coronavirus exceeds 31.5 million people globally
11:54
U.S dollar appreciates by 30 tyiyns for a week in Kyrgyzstan
11:38
Russia to deliver 100,000 doses of measles vaccine to Kyrgyzstan, Belarus
11:26
Head of tax office in Leninsky district detained for illegal issue of licenses