Kyrgyzstanis around the world have joined the campaign against violence and for women’s rights. They come out to the streets, and take pictures with banners in support of a peaceful rally with the hashtag #netnasiliyu (no violence).

About 10 natives of Kyrgyzstan came out to support the campaign with slogans against violence in Prague (Czech Republic). 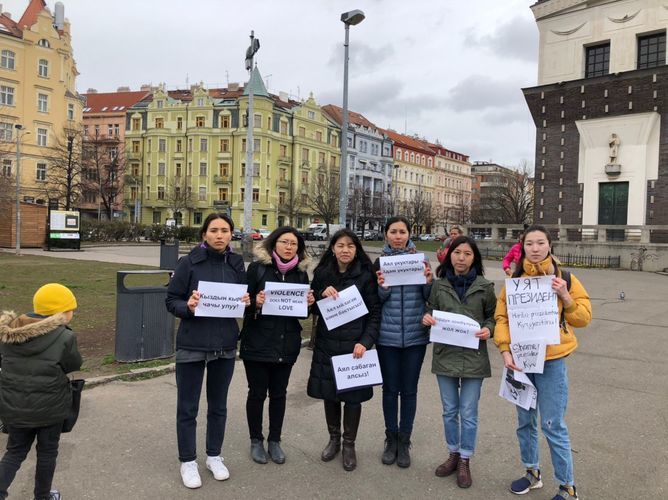 Girls from the Kyrgyz Republic, who currently live in Palo Alto city (California, USA), came out with banners and walked around the city in solidarity with activists from Bishkek. «We gathered people for the peaceful march in Palo Alto to support our women in Kyrgyzstan,» one of the participants posted.

The campaign was also supported by an Associate Professor at the College of International Security Affairs (NDU) Erika Marat.

The video was shot and posted on social media by a journalist Elena Nechaeva, who is also in the United States.

The campaign with the hashtag #netnasiliyu was held near the monument to Urkuya Salieva in Bishkek yesterday.

The initiators stress that women intend to declare equality and protection of their rights. On March 8, masked men disrupted women’s march of solidarity on Victory Square. However, police officers did not detain the aggressive provocateurs, but participants of the peaceful march.

In response to the actions of the police and against lawlessness, active citizens organized the campaign against violence and in support of the participants of the march.