A native of Kyrgyzstan was arrested in St. Petersburg (Russia), who allegedly made inscriptions on the buildings, calling for assassination of the President of Russia. Interfax reports.

The media outlet refers to the joint press service of the city’s courts and reports that 22-year-old Mukhammadaziz Ishmatov is charged with committing crimes under the articles «Vandalism» and «Public calls for terrorist activities.»

Investigators found out that unknown man conspired with some Parpiev through the Internet, offering the latter to make a stencil in the form of an image of the leader of the Russian Federation and the words «Kill when you see», after which, using paint and the stencil, paint the image on the facades of a number of buildings in St. Petersburg.

Parpiev agreed and involved Ishmatov. The partners have made inscriptions on six buildings.

As noted, Ishmatov does not recognize his involvement. According to the court, he will be in custody until March 27.

According to media reports, both suspected persons are the natives of Kyrgyzstan. 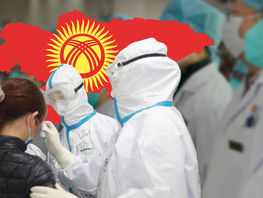