A British research company has compiled a ranking of the best universities in Central Asia and developing countries of Eastern Europe.

The list includes 350 higher education institutions. The universities were evaluated based on 10 different indicators, including academic reputation, image of employer, ratio of teachers and students, impact of each university on research and others.

As for Kyrgyzstan, the ranking includes two its universities: the American University of Central Asia and the Kyrgyz-Turkish Manas University. AUCA took the 163rd place in the list, and KTU Manas is the 190th.

The leader of the ranking is the Lomonosov Moscow State University.

The ranking of the best universities in the world (QS World University Rankings) is a global study and the accompanying ranking of the best higher education institutions of world significance in terms of their achievements in education and science. It is compiled according to the methodology of the British consulting company Quacquarelli Symonds (QS). It is considered as one of the most influential global university rankings. 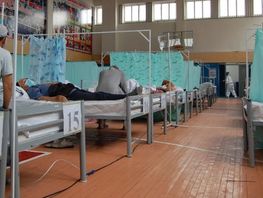 Heads of two schools die for a day in Kyrgyzstan