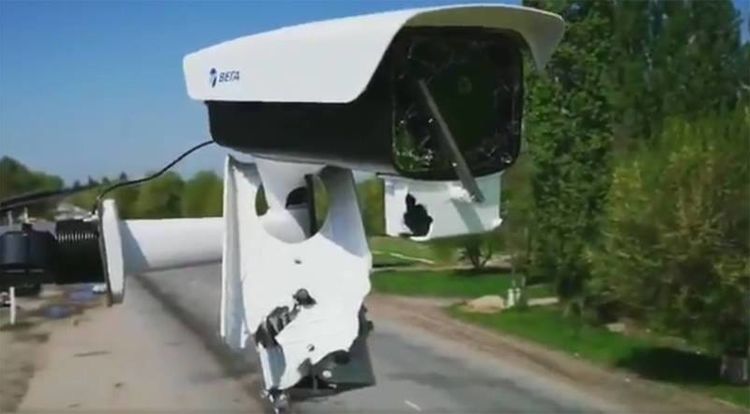 Those who destroy or damage the hardware and software systems and CCTV cameras of Safe City project will be obliged to compensate for property damage, which is millions of soms. Press service of the Ministry of Internal Affairs of the Kyrgyz Republic reported.

According to the ministry, 14 similar facts of vandalism have been registered in Bishkek and Chui region. The damage amounts to millions. The internal affairs bodies are investigating these facts.

Offenders resort to various methods of destruction, including firing at cameras from weapons, they stick up chewing gum on them.

Related news
Prime Minister calls 1st phase of Safe City project successful
«Dear citizens, we remind you that persons who destroy or damage other people’s property will be held accountable in accordance with the legislation of the Kyrgyz Republic. In addition, the perpetrators will be obliged to compensate for property damage, which is millions of soms,» the police appealed to the population.

Mosques and other religious institutions not work in Kyrgyzstan yet
News brief
2 June, Tuesday
16:28
Another employee of Health Ministry infected with COVID-19 Another employee of Health Ministry infected with COVI...
16:19
Ex-president of Kyrgyzstan Kurmanbek Bakiyev comments on extradition to Bishkek
15:45
Public transport drivers fined in Bishkek for violation of mask requirement
15:36
Six more Kyrgyzstanis return to Bishkek from India
14:16
Number of infected with coronavirus exceeds 6.2 million people globally
13:57
Two more medical workers contract coronavirus for a day in Kyrgyzstan
13:53
79-year-old woman dies of coronavirus in Naryn region
13:45
179 citizens of Kyrgyzstan return to Bishkek from Minsk
13:39
Residential building burns down at night in Novopavlovka village
13:34
Prosecutors receive 68 torture allegations since beginning of 2020