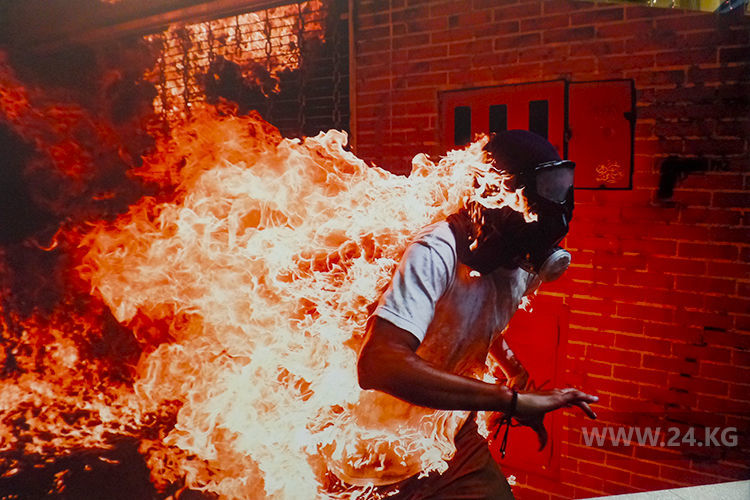 The World Press Photo exhibition was opened at the American University of Central Asia in Bishkek. It presents the works of the winners of the photo award — one of the most prestigious in the world.

In 2018, more than 70,000 photographs by 4,548 photographers from 125 countries of the world were sent to the jury. The main prize was awarded to a photographer from Venezuela for a picture depicting a burning participant of an anti-government protest in Caracas. 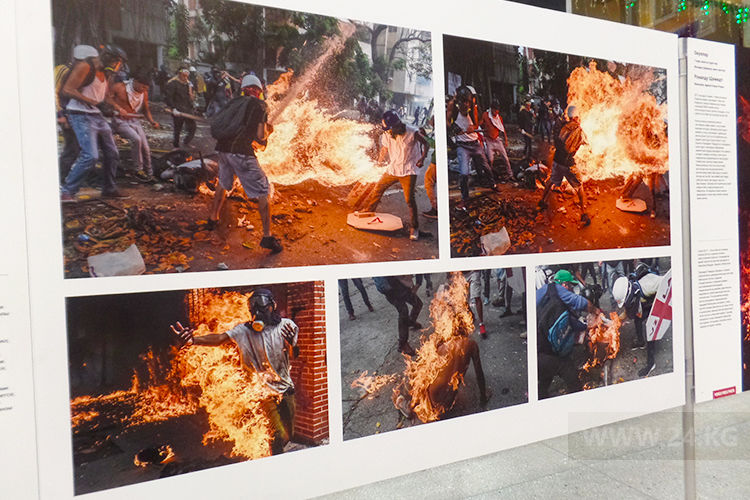 Photos presented at the exhibition make you think about the events taking place in the world. The best works are selected in the nominations «art and entertainment», «hot news», «people in the news», «events», «portraits», «everyday life», «nature», «problems of modernity» and «sports». Each picture is accompanied by a short description.

There are photos of shooting of the audience at the festival of country music in Las Vegas and portraits of girls abducted by militants to make live bombs out of them.

There is a photo of a Cameroonian, binding the breast of her daughter, to suspend her growth. Women hope this will prevent rape or harassment.

There are also the penguins-climbers and African penguins, whose populations are rapidly declining; the southern white rhino blindfolded, which is under the influence of tranquilizers. The animal is being prepared for release into the wild in Botswana to protect it from poachers.

These are photos that touch, shock, surprise, make you think, remind of everything that happened last year in the world.

«We are very glad that we brought the exhibition to Kyrgyzstan so that people could enrich themselves with knowledge and information, be inspired by the award-winning photographs. The world is changing, technologies are changing, but the belief that people deserve to see the world around and express themselves freely, is unchanged,» said one of the organizers of the exhibition, Director of the Media Policy Institute Begaim Usenova.

Exhibition volunteer Jamal Esenbayeva admitted that visitors came to the exhibition in anticipation of beautiful photos.

«But they see that these are not just beautiful photos. They show the real problems of people around the planet. Perhaps, the visitors did not encounter such problems, they did not know that this was happening. When you tell about events, when people read the description of the photos, they begin to sympathize, become sad, some of them cry,» she told.

The volunteer admitted that she was impressed most of all by photos of women who could not learn to swim because of religious beliefs, or girls abducted by an African Islamist group, who would be then transformed into live bombs for terrorist attacks.

The exhibition will run until January 24.