The grandson of the ex-president of Kyrgyzstan, Almazbek Atambayev, took the first place at a chess tournament in the United Arab Emirates. The official website of the tournament reports. 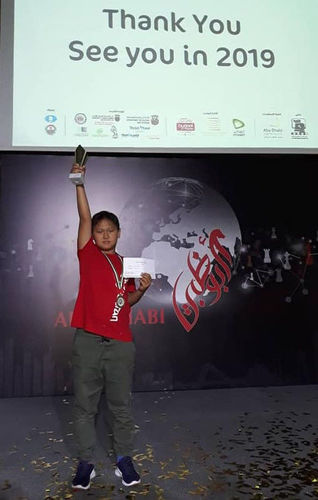 The 25th Abu Dhabi International Chess Festival 2018 was held from August 6 to August 16 in Abu Dhabi.

Sportsmen competed in seven categories. Selim Atambayev performed in the competitions among juniors in the age category up to ten years.

Selim Atambayev won five out of 9 games, tied twice and twice lost to his rivals. His final result — 6 points — allowed him to get ahead of the athletes from India and take the first place.

Selim Atambayev won the gold medal and received $ 500 from the prize fund of the tournament.

28 more people get infected with coronavirus in Kyrgyzstan, 1,845 in total
News brief
5 June, Friday
17:36
President: Digitalization should improve quality of services in regions President: Digitalization should improve quality of ser...
17:09
Three Kyrgyz Temir Zholu employees suspected of fraud
16:41
Two million soms planned to be recovered from journalist Bayan Kulova
15:31
Free Economic Zone of Bishkek. Unfulfilled hopes of the economy
15:30
Over $ 300,000 transferred from Russia to Kyrgyzstan under fictitious contracts
13:56
At least 16,000 women give birth twice a year in Kyrgyzstan
13:32
Tourist season in Issyk-Kul region to become more active after June 20
13:21
Post-crisis government plan of Kyrgyzstan to be presented by end of June
13:10
Sergei Ponomarev: It is necessary to simplify tax administration
13:00
High risk of coronavirus infection observed in markets of Kyrgyzstan