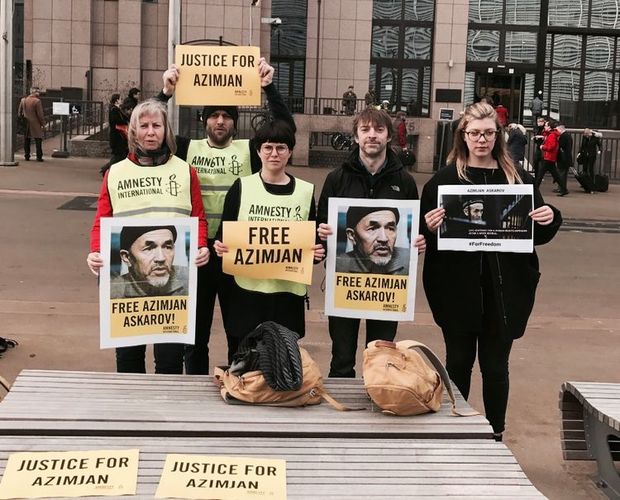 Activists of Amnesty International met the President of Kyrgyzstan in Brussels with a picket in support of Azimzhan Askarov.

On February 16, Almazbek Atambayev was met in Brussels not only by the leaders of the European Union, with whom he agreed to negotiate over a new bilateral cooperation agreement, but also by the activists of Amnesty International.

«They gathered in front of the Council of Europe building where the head of the Kyrgyz Republic was going to meet with the European Council President Donald Tusk. The cortege of the President drove the activists by when they demanded the release of human rights defender and prisoner of conscience Azimzhan Askarov, sentenced six and a half years ago to life in prison on false charges," the organization noted.

Azimzhan Askarov, an ethnic Uzbek, was accused of involvement in the murder of a policeman during the ethnic clashes in southern Kyrgyzstan in June 2010. The human rights activist himself argued that he only recorded on the camera the happening violence, for which he paid with his freedom. According to him, immediately after the arrest, he was tortured in the police station. In September 2010, the court sentenced him to life in prison, rejecting all the arguments of the lawyer, who was freely subjected to constant attacks from the public.

«In March 2016, UN Human Rights Committee recognized that Askarov became the victim of torture, was subjected to arbitrary detention, was kept in degrading conditions, in addition, he was denied the right to a fair trial. The Supreme Court of Kyrgyzstan was forced to reconsider the case of Askarov in July 2016, but instead of release, the human rights defender faced retrial: the case was sent for review. On January 24, 2017, Chui Regional Court decided to uphold the life sentence to Askarov," the Amnesty International noted.

Amnesty International believes that the charges against Azimzhan Askarov were fabricated and politically motivated, and recognizes him as a prisoner of conscience, imprisoned solely for his activities in the field of human rights.