Ex-deputy of Parliament of Kyrgyzstan Iskhak Masaliev was summoned for interrogation by the State Committee for National Security (SCNS). He announced on his Facebook page. 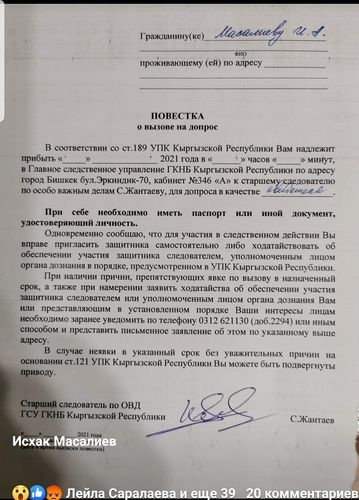 According to the former deputy, he received the summons today. It states that he was summoned as a witness with a lawyer.

According to the ex-deputy, this is due to his participation in the rally on March 9 against the referendum on adoption of draft new version of the Constitution.

Activist Tilekmat Kurenov was arrested earlier. He was one of the organizers and moderator of this protest.

Kamchy Nurbek uulu, according to Zhenish Moldokmatov, was detained by law enforcement officers on the night of March 17 and his whereabouts are unknown since then.