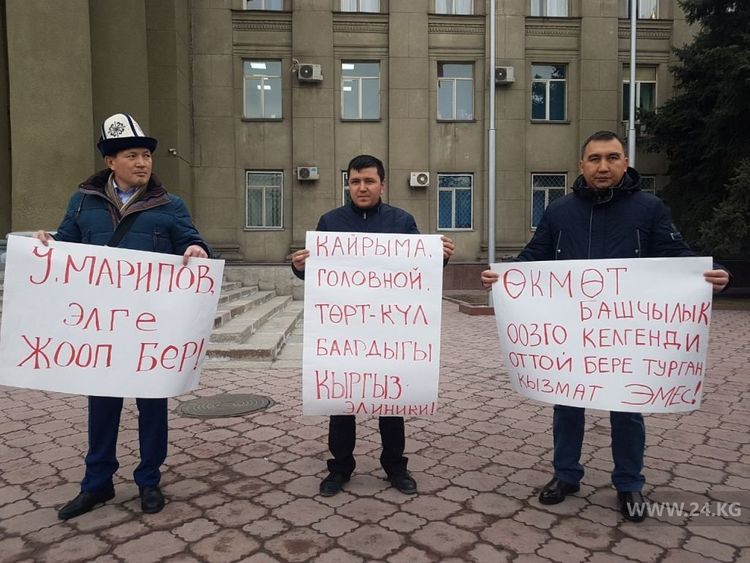 Residents of Batken held a rally at the Government House in Bishkek demanding an explanation from the newly elected Prime Minister of Kyrgyzstan Ulukbek Maripov on his statements on Tortkul water reservoir.

«Speaking to the deputies, Ulukbek Maripov said that Kyrgyzstan had lost the head canal of the reservoir. We demand to explain to the people who owns the canal, because the Prime Minister cannot make such statements without having information on such an important issue. The reservoir belongs to Kyrgyzstan. His statements give the Tajiks a reason to say that this is their canal. So if he was wrong, let him apologize!» a resident of Batken, Abdyzhapar, Dosov said.

On February 4, Ulukbek Maripov, speaking in Parliament, said that part of the canal through which the reservoir is replenished had been handed over to Tajikistan. Later, the Government refuted the words of the head of the Cabinet, assuring that this canal fully belongs to the territory of Kyrgyzstan. As it turned out, Ulukbek Maripov announced distribution of water resources in accordance with the agreement signed on May 16, 1991.
Tortkul reservoir is the only one in Batken region of Kyrgyzstan. It is also the only source of fresh water for residents of six nearby villages and Batken. Locals call it the pearl of the region. The water reservoir area is 6.6 square kilometers, the volume is 90 million cubic meters of water. The reservoir is filled mainly thanks to melting snow and other sources.