The Ministry of Culture of Kyrgyzstan banned all television operators from broadcasting Aprel TV channel. The corresponding letter was sent by the Deputy Minister of Culture, Information and Tourism Nurzhigit Kadyrbekov. Website of the channel reports.

Sources from the Ministry of Culture handed over a scanned copy of the letter to the editorial office.

The document stresses that on the basis of the appeal of the Military Prosecutor’s Office, it is necessary to take all measures to «prevent illegal broadcasting of Aprel TV channel.»

The letter was sent, according to the editorial office of Aprel, to all television broadcasting operators.

At the same time, the permission for television broadcasting issued by the Ministry of Culture itself is still valid. No one has canceled it. 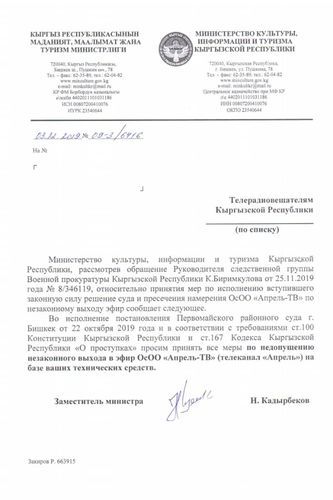