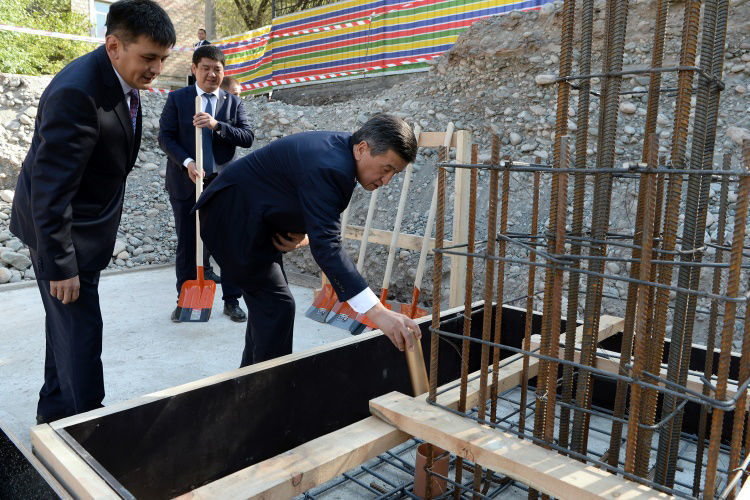 President of the Kyrgyz Republic Sooronbai Jeenbekov laid capsules on construction sites of new buildings of schools No. 12 in Bishkek and in Orok village of Sokuluk district. The Information Policy Department of the Presidential Administration of Kyrgyzstan reported.

According to it, the buildings will be constructed at the expense of the means on the Single Deposit Account, received as a result of the fight against corruption.

President talked with the villagers and teachers in Orok village. He noted that schools in Bishkek, Chui and Osh regions are overcrowded due to internal migration.

«We all know about this big problem. Therefore, we decided to transfer the funds from the Single Deposit Account for the construction of educational institutions and additional buildings for them,» Sooronbai Jeenbekov stressed and added that in the future it is planned to spend the funds on construction of kindergartens.

The head of state stressed that the eradication of corruption was the main task of the state.

«The famous statesman Korchubek Aknazarov said that corruption was like weeds that need to be uprooted. We will make every effort for this, the fight against corruption will continue,» he stressed.

The Information Policy Department said that students of the secondary school in Orok village are taught in three shifts. The new school building will consist of two floors and is designed for 500 students.

A three-story building with 385 places will be built at school-gymnasium No. 12 in Bishkek.

Construction work is expected to be completed in 2020.

The Ministry of Education and Science of the Kyrgyz Republic has drawn up a list of schools where work will begin in 2019. There are 15 of them: seven in Bishkek and Chui region and one in Osh city.