Participant of multiple rape expelled from Kyrgyzstan to Kazakhstan

Shokan Abylkasymov, who was put on the interstate wanted list for committing multiple rape, was arrested on March 5 in Alamedin village.

A resident of Astana, Saina Raisova, was raped by a group of men in June 2017. Her boyfriend Shokan Abylkasymov abused the girl. During the rape, the man and his friend filmed everything on a cell phone.

The Kazakhstani was handed over to the competent authorities of the neighboring republic. 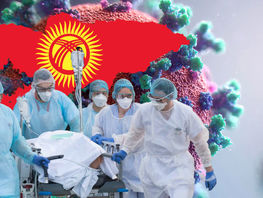 52 new coronavirus cases registered in Kyrgyzstan, 1,520 in total
News brief
29 May, Friday
17:28
Mosques and other religious institutions not work in Kyrgyzstan yet Mosques and other religious institutions not work in Ky...
16:12
Four more laboratories to begin testing for coronavirus in Kyrgyzstan
15:56
Government of Korea allocates $ 300,000 to Kyrgyzstan for fight against COVID-19
15:47
Vacations on Issyk-Kul permitted from June, feasts, events still banned
15:28
Kyrgyzstan to resume domestic flights on June 8
15:20
Kindergartens to resume work on June 5 in Kyrgyzstan
15:16
At least 58 Kyrgyzstanis return to Bishkek from Korea and the Philippines
15:10
Pamir Kyrgyz to move to Alai district of Osh region from Naryn
14:59
Kubatbek Boronov: Denial of coronavirus existence is irresponsibility
14:43
Four Bishkek cafes fined for non-compliance with Health Ministry requirements