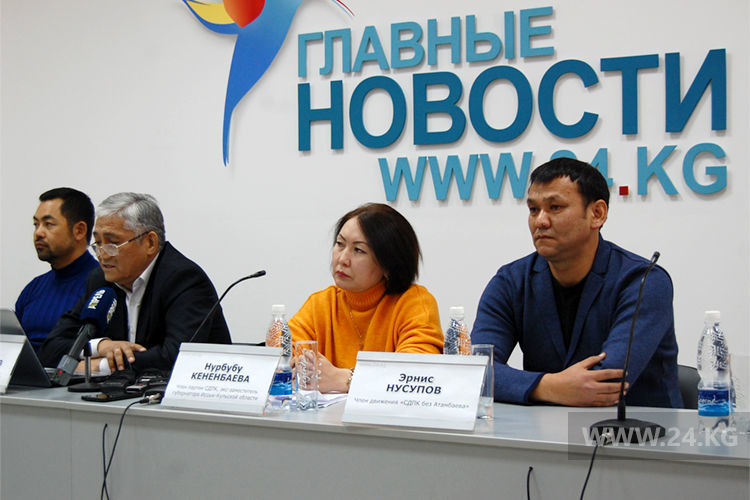 Members of the movement SDPK without Atambayev intend to raise the issue of excluding the ex-president of Kyrgyzstan from the party ranks at an extraordinary party congress. The head of the movement Sagynbek Abdrakhmanov told about it at a press conference in 24.kg news agency.

According to him, Almazbek Atambayev uses the party to protect his corrupt friends, he created a personality cult for himself. Sagynbek Abdrakhmanov added that 99 percent of the Social Democrats did not support the former head of state.

He believes that following the instructions of Almazbek Atambayev, the provocateurs penetrate into the party conferences where the movement elects delegates to the extraordinary party congress and try to disrupt the meetings.

The last such incident occurred at a party conference in Sverdlovsky district of Bishkek, when MP Irina Karamushkina came there.

«She made a scandal, began to insult us. Although we were ready to hear her report as a vice chairperson,» said Sagynbek Abdrakhmanov.

He was supported by ex-deputy of the Parliament Daniyar Terbishaliev who said that SDPK needed to be cleansed. He stressed that all parties in Kyrgyzstan were authoritarian and there was no political competition in them, leaderism was flourishing.

Number of domestic violence cases increases by 30 percent in Kyrgyzstan
News brief
25 September, Saturday
12:01
Salaries of servicemen of Internal Troops increased by 40 percent Salaries of servicemen of Internal Troops increased by...
11:52
Elections 2021: Mobile groups start working abroad
11:38
One medical worker diagnosed with coronavirus in Kyrgyzstan for 24 hours
11:32
Two patients die in Kyrgyzstan from coronavirus for 24 hours
11:24
1,361 COVID-19 patients registered in Kyrgyzstan, 196 - in serious condition
11:08
79 cases of pneumonia, COVID-19 registered in Kyrgyzstan, 178,202 in total
10:58
Bishkek roads to be closed for traffic due to half marathon tomorrow
10:49
Development of project for construction of E-Commerce Park begins
10:40
Strategic Masterplan for remediation of uranium sites in Central Asia signed
09:48
New project to conserve historic Burana Tower launched in Kyrgyzstan