A large concert program in the opened the Days of Culture of Kyrgyzstan in  the day before. There was not a single free seat left in the hall for 6,000 people, and thousands more of our compatriots also wanted to get to the event.

The state visit of the President of Kyrgyzstan Almazbek Atambayev coincided with the opening of the Days of Culture of Kyrgyzstan in . This year they take place in one of the largest halls in  — the . All masters of Kyrgyz art take part in the concert. The program is interesting, rich and diverse. Both opera and folklore performers, as well as pop stars performed on the stage.

The square at the entrance to the is crowded even before the beginning of the event. There are many representatives of the Kyrgyz diaspora. The event became for them another good opportunity to meet with old friends and acquaintances.

«We get to know about the concert on the Internet. We turned to our embassy, ​​they gave us free tickets. It’s great when you can listen to native music far away from your native land!» Aizada shared her impressions.

The Kyrgyz diaspora in  is one of the largest and most amicable. These people always help each other in difficult situations. A campaign unfolded in social networks. People shared messages about the future concert and urged everyone to go there.

«We came from as a part of a delegation of 250 people. Days of culture include not only a concert, but an exhibition, screening of Kyrgyz movies. Since the concert program is called «Masters of Kyrgyz Art», we tried to gather all the best. Zhenish Ismanov, for example, flew directly from ," coordinator of the concert program Darika Asylbasheva told.

Singers and dancers were preparing for the concert for almost a year. They told that they rehearsed from morning till night. After all, it is a special honor for many artists to perform in the .

Minister of Culture, Information and Tourism of Kyrgyzstan Tugelbai Kazakov stressed that «commonness of the history and culture of the peoples of the two countries is measured by centuries of indissoluble bonds of friendship, brotherhood and trust." «Today’s event is aimed at strengthening the dialogue between our countries, preservation, mutual enrichment and rapprochement of unique cultures," he said. 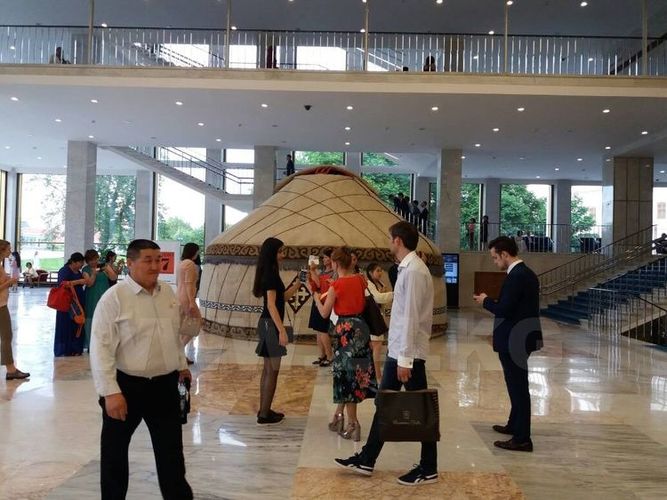 Special Representative of the President of Russia for International Cultural Cooperation, Mikhail Shvydkoy, stressed the inextricable link and closeness of the two peoples. «The talks between the presidents of  and showed that we are very close people who are going to go together in the future," he said.

Days of Culture of Kyrgyzstan will last 15 days. In addition to , Russian regions will also learn more about the Kyrgyz culture: large-scale events will unfold in  and .