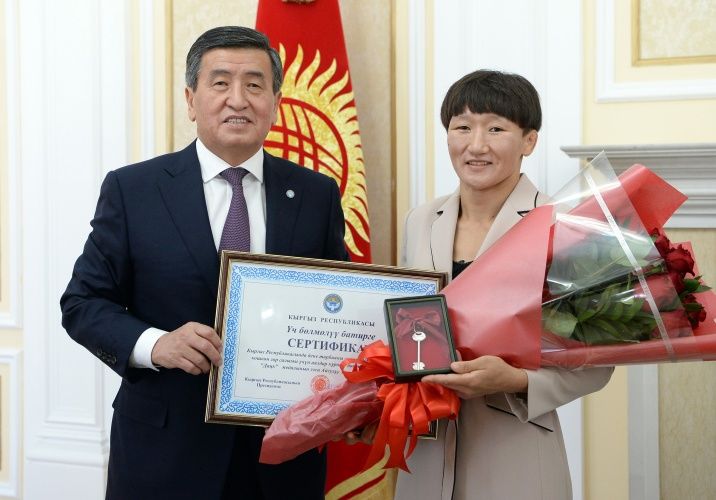 According to him, the head of state met with the famous athlete today. The coach was handed a cash reward.

Aisuluu Tynybekova became the first world wrestling champion in the history of independent Kyrgyzstan on September 20 in Nur-Sultan.

Aisuluu Tynybekova is one of the highest paid athletes of the Kyrgyz Republic. She receives monthly 60,000 soms in the form of allowance from the state budget. For the victory at the Summer Asian Games, she was awarded the Dank medal and 1,250 million soms. She got 1 million soms for the fifth place at the 2016 Olympic Games.

32 more people die from pneumonia for a day in Kyrgyzstan
News brief
14 July, Tuesday
18:15
Employee of Parliament’s Office Abdykaiym Omorov dies Employee of Parliament’s Office Abdykaiym Omorov dies
18:06
18 Kyrgyz medical workers to come from Turkey to help their homeland
17:55
Almost a third of deputies of Bishkek City Council suffer from pneumonia
17:40
Government of Kyrgyzstan promises to eliminate shortage of drugs in coming days
17:30
Kyrgyzstan to purchase medicines in Russia, Iran, China and India
17:24
Heads of two schools die for a day in Kyrgyzstan
17:10
Electronic queues to be organized at day patient centers in Bishkek
16:35
Ex-Minister of Youth Aliyasbek Alymkulov diagnosed with pneumonia
16:11
Mudflow floods houses and bridge in Batken region of Kyrgyzstan
15:50
Family of British Ambassador to Kyrgyzstan prepares meals for medical workers