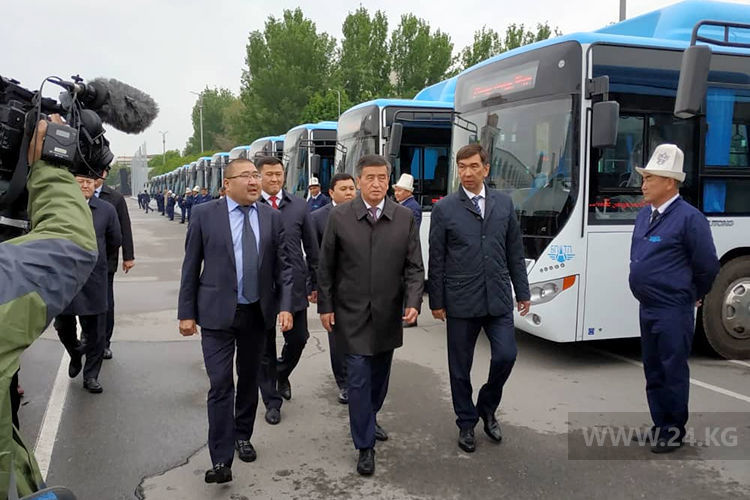 This morning, central Ala-Too square of Bishkek became a workplace for the President of Kyrgyzstan. Sooronbai Jeenbekov inspected new buses that were bought by the city administration.

Related news
First 60 new buses delivered to Bishkek
Recall, 60 buses were delivered to Bishkek. Mayor of the capital Aziz Surakmatov outlined that, following the instructions of the President, buses running on gas were purchased. He believes that this type of fuel is not only environmentally, but also budget-friendly.

The president was told that the buses were equipped with video cameras that shoot the happening both on the street and inside the cabin. An electronic ticketing system was also presented. Especially for this, validators have been installed in some buses. The head of state was offered to ride a new bus. Sooronbai Jeenbekov and numerous attendants took a ride on the bus.

According to Nurlan Koichubakov, Director of the Bishkek Passenger Transportation Company, the city administration is at the stage of signing an agreement, some issues are to be clarified.

He recalled that the results of the competition for implementation of Electronic Ticketing project were summed up on April 5.

It is expected that the system will fully work in September, and the installation of the equipment will begin next week.

Fleet of the enterprise was last time updated 11 years ago.

It is planned that new buses will start serving city routes on Monday, on City Day. They must undergo customs clearance and get number plates at the State Registration Service.

Mayor Aziz Surakmatov noted: 500 buses and 300-400 trolleybuses are needed to fully cover the city’s need for public transport. As of today, about 115 buses are serving routes in the city, other 25 are being repaired.

The mayor added that the city would try to buy transport each year.