Lawyer: Kidnapped Orhan Inandi had been tortured for 35 days

Orhan Inandi, the kidnapped director of Sapat international educational institution, had been tortured for 35 days. Lawyer Taalaigul Toktakunova posted on social media with reference to her colleague in Turkey.

According to her, the media of Turkey disseminate information that does not correspond to reality.

«According to my colleague, a lawyer from Istanbul, Orhan Inandi had been tortured during these 35 days, his arm was broken (malunited hand fracture can be seen in the photo). Despite this, he did not confess to anything, because he is not a member of any illegal organization and did not commit any illegal acts. His fault is that he opened the best schools on the territory of Kyrgyzstan, gave the graduates of lyceums an opportunity for a better future,» Taalaigul Toktakunova wrote. 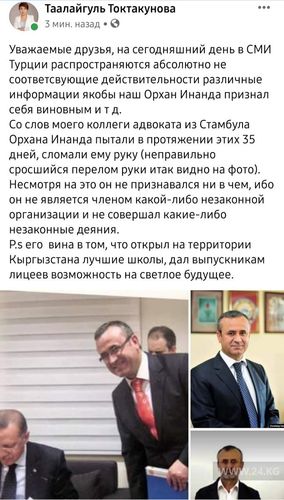 Orhan Inandi went missing on May 31, 2021. The wife of the president of Sapat international educational institution Reihan Inandi appealed to the president Sadyr Japarov four times with a request to help in search for her husband.

On July 5, 2021, the President of Turkey Recep Tayyip Erdogan said on the air of the state TV channel TRT Haber that Orhan Inandi, one of the so-called top leaders of FETO, had been captured and taken to Turkey.

On July 6, the President of Kyrgyzstan Sadyr Japarov said in an interview that the government would demand Inandi’s prompt return to Kyrgyzstan.

The Main Internal Affairs Department of Bishkek reported that Orhan Inandi, director of Sapat, has dual citizenship. He was taken into custody by the decision of Ankara court.