Rally in support of one of the founders of Aknet company, who is under investigation, Kuban Azhimudinov, was held near the building of the Pervomaisky District Court of Bishkek, where the first hearing of the case was scheduled for today.

About 20 people stood in front of the courthouse and held posters demanding a fair trial: «Kuban, do not give up!», «No to the raider seizure of Aknet.» 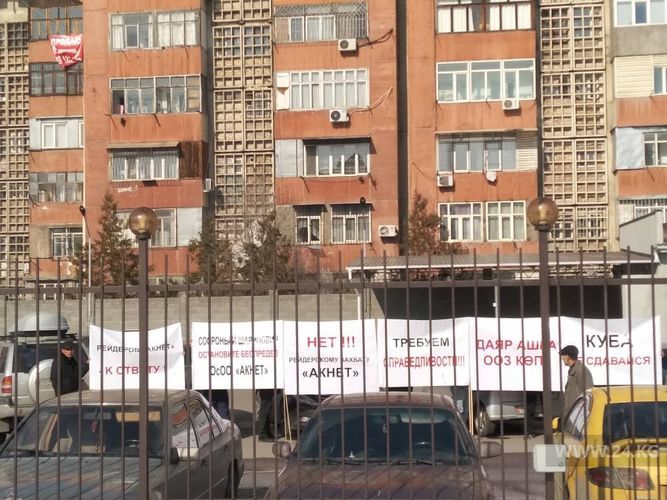 Earlier, the State Service for Combating Economic Crimes investigated a criminal case against Kuban Azhimudinov and according to its results revealed facts of tax evasion in the total amount of 150 million soms. The investigation was entrusted to the Ministry of Internal Affairs.

According to the state agency, additional facts of tax evasion by the president of Aknet LLC for a total of 616,816 million soms were revealed.

In addition, the facts of misappropriation and embezzlement through illegal write-offs, non-receipt by the cash desk for a total amount of 384,901 million soms were revealed.

The head of Aknet company was arrested and placed in a temporary detention facility on May 28, 2019. After 48 hours, the court granted a request of the investigation and made a decision on the arrest of Kuban Azhimudinov.

The Internet service provider Aknet came to the attention of the State Service for Combatting Economic Crimes at the end of November 2018. The reason for the proceedings was an appeal to the Financial police of one of the co-founders of the company. He accused his partners of understating the proceeds, transfer of money from the LLC, concluding fictitious agreements and other offenses. The company currently has a new team of top managers.