AUCA Technical School of Innovation lecturer and President of the French-Kyrgyz Association of Ecotourism, Philippe Boizeau, spends a lot of time in one of Bishkek’s largest parks — Karagachevaya Roscha. But he loves walking not along the paved alleys, but in the overgrown part of the park.

Moreover, he takes an active part in a project on the park’s revival.

Almost 40 hectares have been fenced, several trucks of garbage have been taken out, and several dozen trees have been planted in the Karagachevaya Roscha within the project.

— When did you come to Kyrgyzstan and why?

— First time I came to Kyrgyzstan in 2002 as a tourist. Afterwards, I had been splitting my time between France and Kyrgyzstan during several years. My friend from Kyrgyzstan and I created the French-Kyrgyz Association of Ecotourism in 2007. 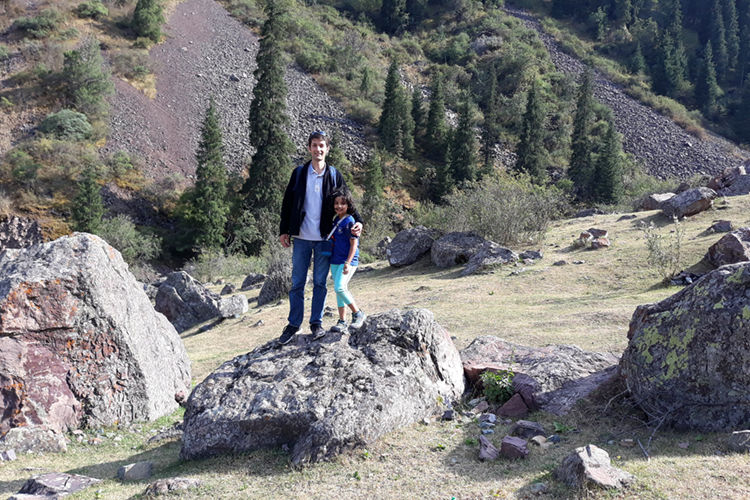 In 2011, we registered this association here, in Bishkek. I am a teacher of mathematics and physics at the AUCA Technical School of Innovation now and also work for the university as a Program Director of the Environmental Management and Sustainable Development Programs.

— What surprised you in Bishkek and Kyrgyzstan when you arrived for the first time?

— First time it was in 2002. I was surprised by the country, the people because it was really easy to communicate with them, especially in mountainous areas and in villages also.

It was completely different from now. There were a few cars at that time and less pollution also. There are a lot of cars everywhere now, and the quality of the air is not good.

— Why did you decide to open the tourism organization in Kyrgyzstan?

— In fact, I was interested in nature of the country. It is very beautiful. The aim of the association is to develop ecotourism. It is a mix of tourism and environmental aspect, ecological aspect. The association originated this sort of tourism and maybe it will develop in the future. The impact of tourism on nature can sometimes be important. 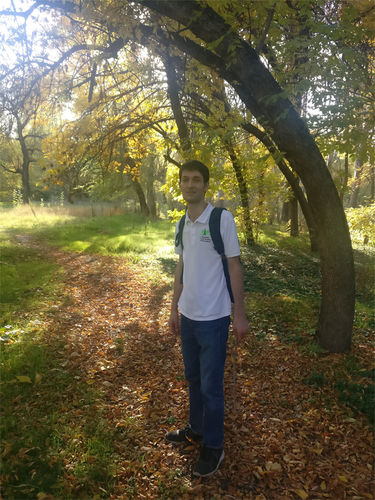 The aim was also to get some income from tourists to develop some environmental projects, like in Karagachevaya Roscha park, for example. It is a very beautiful, unique place.

Maybe people are not aware of this treasure. You can not replace and can not restore all these huge trees.

We have to preserve them now, and in the future, it will be possible to attract tourists to show beautiful places of the park.

— Please, tell about your project.

— The aim of this project is to protect this area, because illegal buildings, constructions have been built there, and people came to cut trees also. I can give an example: one tree (elm tree) costs $1,000, so people wanted to get this kind of trees.

Also I want to add that 50 % of the territory of the park had decreased since independency, so it was urgent to protect this territory.

We also plan to hold some educational activities about the environment to explain the young people, especially young students, why it is important to protect nature.

— Yes, I do. In the past, when there was another project, I also was there often and it was a pity, because I saw the difference year by year.

— How many people know about Kyrgyzstan in France?

— I do not know exactly, but I think more and more. When I came here in 2002, a very few people knew about this country. 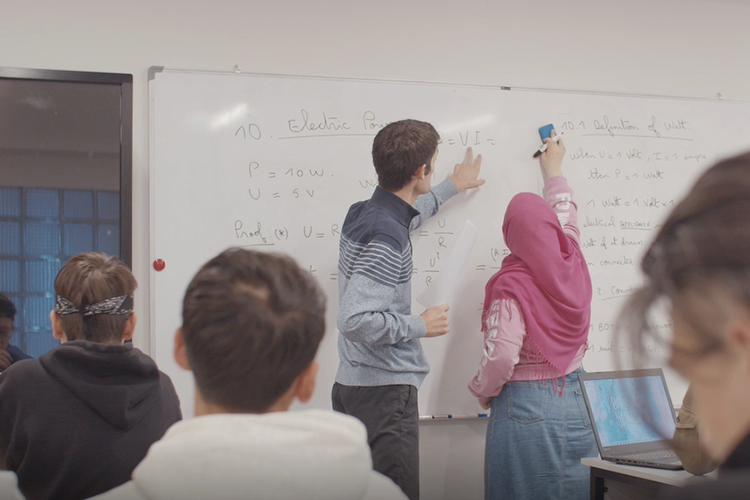 But now, I think, more and more, especially young people. There are more videos and films about the country. Tourism is also developing.

-What about you? How did you learn about our country?

— First time I just looked at the map, and it was interesting, so to say, topographically. 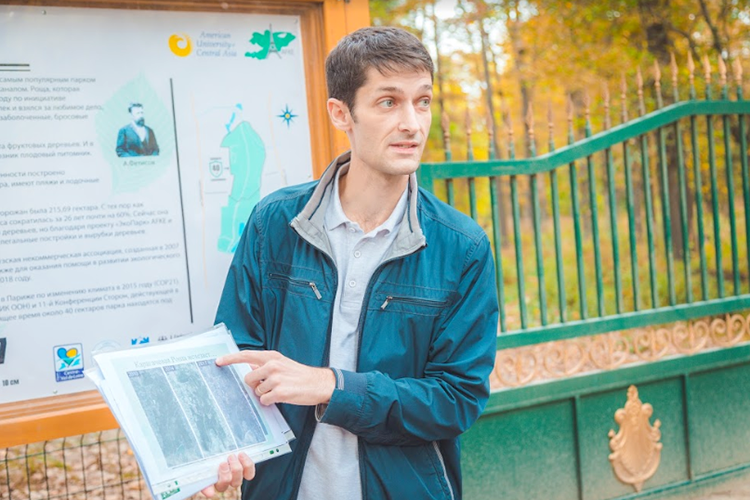 I liked its geographical landscape with mountains. The culture of the state was interesting. So I wanted to visit it. And then I returned again and again.

— What reminds you of your hometown in Bishkek?

— It is difficult to say. I lived in Orleans (France). It is 120 km south of Paris — one hour by train from the capital.

The structure, architecture of the cities is very different. For example, you have a lot of parks, big parks. I know that Bishkek was one of the greenest cities in the Soviet times. There are smaller parks in Orleans, there is Loire river. So, it is the main difference. The city is built around this river. Architecture, people... everything is different. It is not good, not bad. It is just different.

— What do you miss in Bishkek/ Kyrgyzstan?

— It is my family first, because my parents are there, my family is there. And secondly, sometimes, it is culture. You know, there is difference. So I miss the two things.

— There are a lot of beautiful places in Kyrgyzstan not far from Bishkek. I like Alamedin valley, Issyk-Ata valley. The nature is very beautiful there and there are not many people. 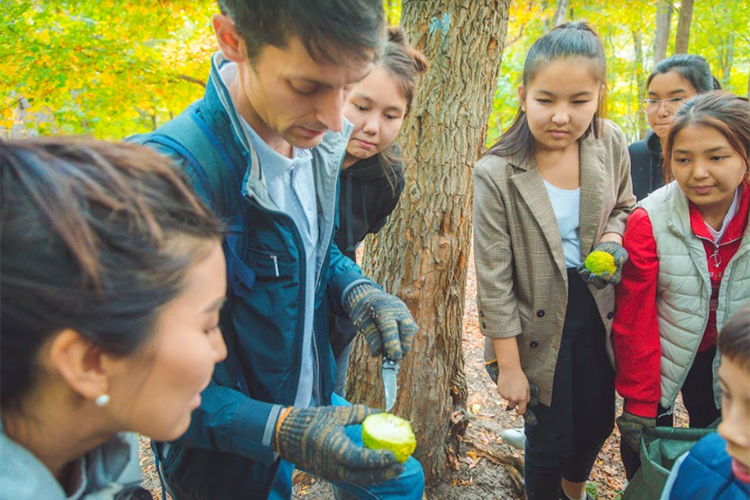 I have already visited all regions of the country. Maybe, there are some places in the south of the republic where I have not been to. I like the mountains, to watch the animals. I like vegetation.

— Do you like national cuisine and what is your favorite dish?

— It is beshbarmak and plov.

— What national dishes are you afraid to even try?

— Sheep’s eyes were surprising. I tasted them, but I did not like them to be honest. There are some products made of milk that I do not like, for example kurut. It is very salty for me, but it depends.

— What about national drinks: maksym, chalap?

— Maksym is good. I like it especially in summer time.

— It is easy to talk to the people, especially in the villages, in the mountainous areas, compared to European countries. I think it is easier to get some contact.

— And what has disappointed you?

— Maybe, it is corruption. It is not good, especially in policemen.

They have good imagination sometimes to find something to get some money.

— Did you have any funny cases, some stories, or, maybe, some problems?

— The people are friendly most of the time. Yes, I had some problems sometimes, but it is like everywhere. You can also have some problems in France like in any other place.

link: https://24.kg/english/137970/
views: 1496
Print
Related
Choreographer from Cuba Michael Campos: Kyrgyzstan is special
Eraj Kaniev from Gorno-Badakhshan finds his home away from home in Kyrgyzstan
Mary Bernadette Condé became Kyrgyz kelin, but still not used to local customs
Ambassador of India to Kyrgyzstan: I would like to see more libraries in Bishkek
Makiko Uehara and Aya Murakami: Japanese and Kyrgyz are similar in appearance
Kübra Erbayrakçı from Turkey about wonderful aspects of Kyrgyz language
Mariko Kato misses the sea, but fell in love with mountains in Kyrgyzstan
Adnan Qureshi: Spirit and atmosphere in Bishkek are similar to London
Ina Creanga tells why she changed forests of Moldova for mountains of Kyrgyzstan
Joanis Santa Cruz from Cuba learns Kyrgyz to dedicate a song to Kyrgyzstan
Стоимость акций Центерры на бирже в Торонто (TSX)
на 10.05.2021
USD 6,9