A new banknote −2,000 soms will appear in  timed to the jubilee of Kyrgyz som. Chairman of the National Bank Kubanychbek Kulmatov told today at a press conference.

According to him, the new banknote will be issued on November 17, 2017. The new bill will be issued in honor of the 25th anniversary of independence of  and the 25th anniversary of the introduction of the national currency. It has an original design reflecting the history of the formation of Kyrgyz statehood: from ancient times to the present day, and the protective elements of a new generation.

«The main image of the front side of the banknote is a monument to the national hero Manas, who unites the Kyrgyz tribes, which are represented on the banknote in the form of stylized ornamental figures. The image of Umai Ene symbol represents the most ancient deity, who is the progenitor of all Turkic peoples. Dwelling of nomad peoples — the yurt, which is a symbol of prosperity and well-being, is also presented,» the head of the Cash Management Department of the National Bank, Medina Ashiralieva told. 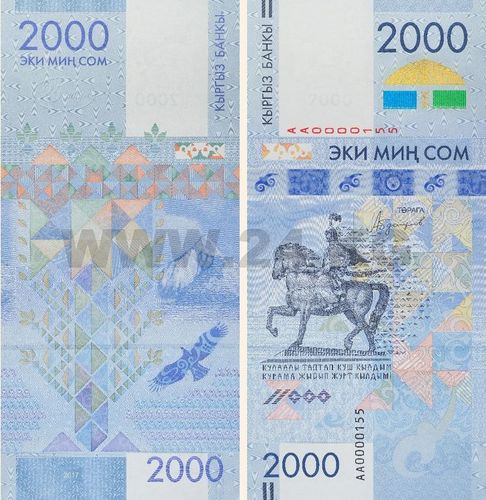 The main protective features of the new bill:

— Color hologram. When the banknote is tilted from left to right, the image of figure 25 changes to the image of the national ornament, and vice versa.

— Micro-optical strip. When changing the viewing angle of the banknote, the three-dimensional depth effect, the volume effect, the radiance effect and the motion effect become visible on the strip.

— Hidden image. When the banknote is tilted, rainbow bands appear.

— Iridiscent strip on the reverse side of the banknote is represented by a two-color image of a soaring bird.

— Pass-through register — overlapping images on the front and back side of the banknote on the lumen form the figure 2,000.

«It will not be available in terminals. This is technically impossible. At once I will say that the banknote will be issued in one circulation. It will not be printed any more. I hope that it will become a tradition to issue banknotes to some memorable dates,» Kubanychbek Kulmatov summed up.