President of Kyrgyzstan Sooronbai Jeenbekov got acquainted with the activities of Cool Bros textile factory in Kyzyl-Kiya, Batken region of the country.

Director of the enterprise Suimonkul Zholdubaev informed that the factory is equipped with modern sewing equipment and can produce up to 500,000 garments per month.

At the moment, 350 people are provided with jobs, in the future it is planned to increase this number to 500. The main part of the manufactured products is exported to the Russian markets.

In addition, taking into account the current epidemiological situation, production of personal protective equipment for the population and medical workers began.

Suimonkul Zholdubaev also shared his plans to open similar enterprises in all regions of the country.

The head of state expressed satisfaction with the fact that socially responsible entrepreneurs did not stand aside in the current situation and make their contribution to the fight against the pandemic.

Sooronbai Jeenbekov assured that such initiatives will always find support from government agencies. 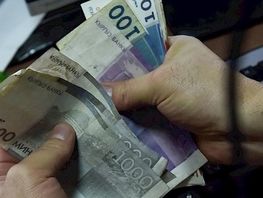